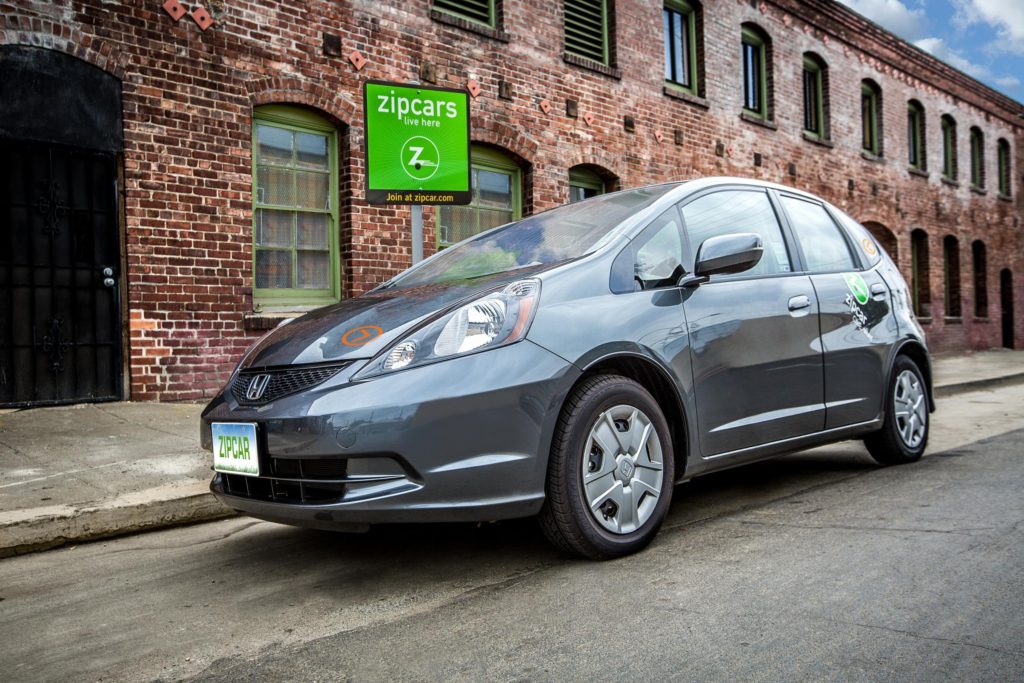 It could be argued that carsharing is the mode that initiated modern forms of shared mobility. Formal carsharing has its roots in Europe in the early 1970s, but the most enduring operations started in Germany or Switzerland in the mid-1980s. Around this time, programs were piloted in the United States in West Lafayette, Indiana and San Francisco, California. These programs ended after a few years.[1]

The early operations worked on a round-trip model, meaning that vehicles were parked and returned to a designated, usually off-street space. Users retrieved keys from a lockbox and locations were charted on hard-copy maps. The rebirth of the mode in the 2000s was enabled by GPS, and later mobile, technology that allowed the user to locate and reserve the vehicle online and unlock it.

The definitions below are drawn from the Metropolitan Transportation Commission’s (San Francisco area) Bay Area Carsharing Implementation Strategy (2018), which is discussed below.

Round-Trip Carshare: Round-trip, or “traditional,” carsharing, which requires users to borrow and return vehicles at the same location, continues to play an important role in the MOD space. Round-trip carsharing can work in most communities, regardless of population density, although the density of vehicles may vary by geographic type. In larger urban areas, for example, multiple carshare vehicles or groups of vehicles may be available within a radius of just a few blocks. On the other hand, in smaller towns or suburban centers round-trip carshare vehicles might need to be strategically placed to capitalize on locations with a strong user base, such as pockets of dense housing, rail stations, and employment centers. When round-trip carsharing is placed in a lower density environment, it often needs an anchor tenant that can guarantee a certain level of usage to support the costs of locating the vehicles.

Given both the paucity of public charging infrastructure and the round-trip model’s dominant role in the marketplace, almost all electric carsharing vehicles have until recently operated as round-trip services. This model may be extended for fleet-based carshare vehicles, especially those primarily made available as daytime vehicles for commuters who get to work by means other than their own car.

Peer-to-Peer (P2P) Carshare: P2P is similar to round-trip carsharing, in that users must return to the point of origin at the end of their trip. The difference is that the service’s owner-members make their privately-owned vehicles available for sharing with renter- members, making use of excess vehicle capacity that would otherwise go unused. This model can also act as a revenue stream or the vehicle owners, helping offset the cost of ownership or parking. Its cars often come with parking “built in,” since many owners already have access to an on- or off-street parking spot for their car. As mentioned in  the previous section, Getaround acquired  150 vehicles and their attendant users with their acquisition of City CarShare in San Francisco. In the course of a Chicago-area pilot of P2P carsharing in a variety of urban contexts, SUMC found that lower-density areas may provide similar utilization challenges for P2P car sharing as they do to other models. However, since the P2P model relies less on a given vehicle’s utilization level than do other commercial models (where the costs of the vehicle and its location fall entirely on the private operator, rather than being shared by owner and operator), this land-use based challenge may be less of an impediment in P2P than in the other models.

One-Way Carshare: Since its introduction, one-way carsharing has continued to grow in the Bay Area and elsewhere. One-way carsharing works best in dense neighborhoods and urban centers since it needs a critical mass of users to meet demand and avoid costly rebalancing measures (i.e., the operator’s movement of cars from low-demand areas to places where they are more likely to be picked up). There are two main types of one-way carsharing:

Both types of one-way carsharing also work well as first/last mile solutions at rail stations and other transportation centers. In these cases, having access to one-way carsharing could potentially make the difference between some-one driving a personal vehicle for both sides of a work trip or choosing to combine other shared modes with public transit. SUMC research sug-gests that use of carsharing as one of multiple shared modes is associated with greater transit use than people who use transit alone.

Subscription Models Several automakers are exploring subscription-based “carshare” services, although these are actually some-where between a vehicle lease and traditional carsharing models, with monthly rather than hourly units of rental and no long-term commitment like a traditional lease. Like carsharing, these models bundle other costs into the subscription price, like insurance coverage, maintenance, and road hazard protection. Several automakers, including Hyundai, Cadillac, and BMW, are exploringthis approach. While the model may bear watching as a way for users to avoid the sunk cost of a car purchase or lease, while also providing readier access to newer, more fuel efficient or non-internal combustion vehicles, at this point high monthly prices for the services (often several times the cost of a lease for a similar vehicle) limit their utility and cost- effectiveness for most users, leaving them instead as a niche service for high-income drivers who don’t want to commit to a vehicle purchase.

Freemium and Gig Economy Carsharing These forms of carsharing are either free-floating (typically for the consumer-facing freemium, i.e. no pay-per-trip, but in exchange for vehicles with advertisements as livery) or round-trip (for the gig economy-serving model). There are notable differences from the models above, and agencies might want to consider them in a regulatory environment. The advertisement model offers users a certain amount of free use in exchange for driving a vehicle that displays advertisements such as might be seen on taxicabs.

Gig economy typically refers to those jobs that typically are performed as an independent operator using an app or other online interface to connect with clients, e.g. ridesourcing drivers or food and other delivery services . Some carsharing companies rent to drivers in ways that are convenient to them, such as a pre-approved for passenger ridesourcing use vehicle for a typical shift length, or an electric vehicle to save on gas money.

Oakland and Berkeley, California have a cooperative permit program that permits car sharing organizations so that their fleet might park in a space in residential parking permit zones for up to 72 hours. The organizations might also prepay so that vehicles might also park in the metered spots for up to 72 hours. The municipalities formed an agreement to enlarge the service area.

Santa Monica, California built a carsharing program into its comprehensive plan, designating on- and off-street parking according to where it saw demand, and then offering permits to operators. From this foundation it also built its Electric Vehicle Action Plan, which added charging station infrastructure planning for private and shared electric vehicles to the framework.

Washington, DC was an early adopter of one-way, or point-to-point, carsharing. In return for allowing the vehicles free rein in both permit parking and meter zones, the providers must both pay an annual permit fee.  DC also has an equity policy that grants parking at fixed rail transit stations provided all wards within the city are served.

Seattle, WA has a free-floating carshare program that established incentives to ensure operators are distributing vehicles equitably throughout the city in exchange for larger fleet sizes. The program was expanded in January 2015 and updated metrics were released in 2016.  The Seattle carshare program complements the Commute Trip Reduction state law and commuter benefits program.

BlueLA, a partner the first-ever electric carsharing pilot in L.A. The pilot will introduce electric carsharing fleets (100 electric cars and 200 charging stations) into disadvantaged neighborhoods in Central LA — Downtown L.A., Westlake, and parts of Koreatown. BlueCalifornia is supported by $1.67 million in grant funds from the California Air Resources Board and $1.82 million in electric vehicle infrastructure rebates, fee waivers, and in-kind support from the City. The pilot aims to increase the number of carsharing users, reduce the need for a private vehicle, and reduce CO2 emissions.

The Metropolitan Transportation Commission (MTC, the Bay Area’s transportation planning, financing, and coordinating agency) as part of their Climate Initiatives Program, implemented strategies recommended in the Bay Area Carsharing Implementation Strategy, completed in 2018. SUMC collaborated with MTC and UrbanTrans North America to author the Strategy, which includes case studies of round-trip, peer-to-peer, and one-way carsharing, with an emphasis on the Bay Area.

Washington, DC  was one of the first cities, beginning in 2011, to implement a one-way carshare parking strategy and also include an equity component in terms of serving all neighborhoods. Their regulation defines a point-to-point, or one-way carsharing program as “a program authorizing point-to-point carsharing vehicles to be parked by point-to-point carsharing customers in residential permit parking zones and at metered parking spaces without having to pay the associated fee.”  The reserved on-street spots for traditional, round-trip carsharing increase access to the shared vehicles and improve visibility for the programs. The city program also helps streamline parking acquisition for carshare operators, who often have to negotiate for private parking spaces on a case-by-case basis.

[1] See Ortega, Juan. N.D. “Carsharing in the United States Helping People Transition from Welfare to Work and Improving the Quality of Life of Low-Income Families,” pp. 2-3.  and Shaheen, Susan, Daniel Sperling, and Conrad Wagner. “Carsharing in Europe and North American: past, present, and future.” (1998).