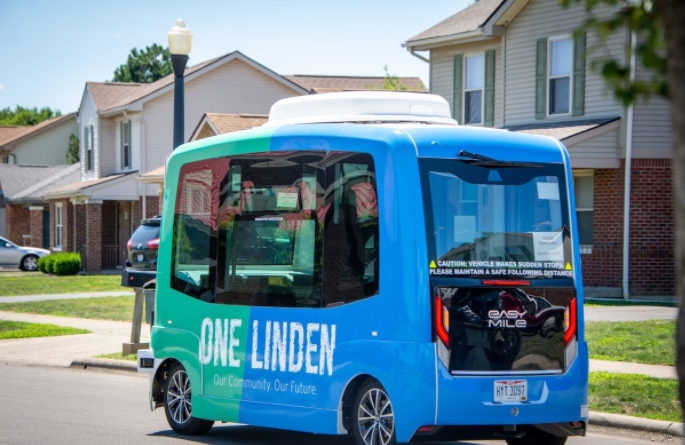 As part of the Smart Columbus Initiative, a USDOT Smart City grant that allocates funds to cities for the use of innovative technology, the Linden LEAP autonomous vehicle (AV) shuttle pilot program launched in February 2020 in Columbus, Ohio.[2] From the beginning, the pilot has gone through several iterations: from a passenger route that served downtown Columbus, to an equity-based model serving the predominantly Black, lower-income South Linden neighborhood, to a food delivery service. This evolution in project design was in part the result of an active community engagement process and an impromptu response to the COVID-19 pandemic. This case study looks at the Smart Columbus Initiative and the evolution of the Linden LEAP pilot as well as its equity focus as it continues to serve the community.

The original AV shuttle pilot program was developed in response to an Ohio Department of Transportation (ODOT) request for proposal (RFP) alongside DriveOhio, which works with the public and private sectors to help design innovative smart mobility projects, issued in August 2018.[4] Referred to as the Smart Circuit, the shuttle served the downtown Columbus area, connecting the Center of Science and Industry, the National Veterans Memorial and Museum, Bicentennial Park, and the Smart Columbus Experience Center from December 2018 to September 2019.

Building on the learnings of the first pilot, Smart Columbus sought community input from neighborhoods across the city during the planning stages of the second deployment. This community input led to Smart Columbus selecting an AV shuttle route serving the South Linden neighborhood to help address issues the area faced. South Linden is a lower-income minority community, with 75% Black population and 55% of the residents earning $25,000 or less a year.[5] A strong community engagement process, led by the Smart Columbus, the Central Ohio Transit Authority, and St. Stephen’s Community House, helped to inform this decision.[6]

In a February 2017 public forum, Linden community stakeholders raised the concern that access to the St. Stephen’s Community House was impeded when the bus stop at St. Stephen’s House was discontinued.[7] The distance between St. Stephens House and transit stops caused a number of challenges to the residents who live in the 230-unit Rosewind townhouses and single-family homes, a public housing complex, as they had to walk to receive services from the community center.[8]

For the Smart Circuit pilot project, Smart Columbus and DriveOhio spent two months testing May Mobility’s autonomous vehicles before going forward with the 10-month passenger service downtown. For the Linden LEAP project, Smart Columbus selected EasyMile as the vehicle and service provider. EasyMile provided two EZ10 model vehicles, a 12-passenger, ADA-accessible, electric, self-driving shuttle that is used in 26 countries across the world.[3] Smart Columbus have control of the operating system, which allows for real-time operational and historical data to be stored from multiple sources.

Shifting from a downtown AV pilot to a neighborhood passenger service, Smart Columbus looked at possible routes in South Linden that were feasible for the shuttle. The capability to store and charge the AV’s in close proximity to the route was an important consideration. The operator EasyMile coordinated with Smart Columbus to find space in the South Linden area and discovered that St. Stephens had sufficient garage parking space on the backside of the building. The garage is heated during the winter months and EasyMile could install charging equipment inside.[6] To weave the shuttle service into the fabric of the community, Smart Columbus named the second pilot program Linden LEAP, which stands for Linden Empowers All People. The service aims to connect the community of South Linden to essential resources that were otherwise difficult to access. The route was designed to connect the St. Stephen’s Community House to the Linden Transit Center with stops at Rosewind Resident Council and the Douglas Recreation Center, providing access to health and social services, and having adequate storage and charging at St. Stephen’s was beneficial to route operations. Additionally, the availability of a traffic circle at one end of the route and a parking lot at the other end helps to switch direction of the shuttle service.

In the short time that it served passengers, two 12-passenger AV shuttles operated on a 2.8-mile route. Passengers could board the shuttle for free at either end of the route or at any of the two intermediate stops (see above map). While in operations, each vehicle had one operator on board at all times. In addition, Linden LEAP was able to hire up to five full-time operators who would be selected through a South Linden community-based job site.

Even though it eventually shifted from passenger to delivery service, Linden LEAP continues to be a public-private partnership between Smart Columbus, Ohio Department of Transportation’s DriveOhio initiative, The Ohio State University (OSU), and EasyMile.[2]

In June 2016, the City of Columbus received the USDOT Smart-City Challenge grant of $50 million.[2] USDOT granted Columbus this award so that the city and region could test innovative approaches to address mobility challenges. Funding for the Linden LEAP program comes from a local match of $1 million from the Smart City Grant.[6] The Linden LEAP was planned to be a one-year demonstration pilot program, after which it would be evaluated to determine whether it would be continued and which funding sources can support the program extension beyond its original planned scope.

As the pilot shifted from passenger to food delivery service, the goals also changed to reflect the program design. However, both sets of goals are worth mentioning as they overlap in the fundamental purpose and offer insights for other cities looking to establish an AV pilot and measure its effectiveness.

After operator EasyMile completed testing, Linden LEAP launched its passenger service in February 2020. The ribbon cutting and launch was attended by city officials, Smart Columbus staff, and residents from the South Linden neighborhood. The passenger service operated Monday – Friday: 6am – 8am, 9:30am -2pm, 3:30pm – 8pm and Saturday – Sunday: 6am – 8pm. The two AV shuttles that served the route aimed to pick-up passengers every 12 minutes, meaning it would take roughly 24 minutes to ride from one end of the route to the other. They traveled an average of 12 mph and did not exceed 15 mph.[3]

Conceived as a passenger service complementing transit, the Linden LEAP shuttle service was discoverable as a mode in the local trip planning app. Since one of the Linden LEAP route terminals was located at the Linden Transit Center, Smart Columbus and the Central Ohio Transit Authority coordinated the deployment of the autonomous shuttle as part of the Linden Transit Center smart mobility hub project. Additionally, the autonomous shuttle was equipped with technologies onboard to communicate with traffic lights, but traffic signal priority capabilities were not needed for operations in a neighborhood streets route.

On February 20th, three weeks after launch, a Linden LEAP shuttle providing passenger service triggered an internal safety mechanism and the brakes were activated suddenly. During this incident a passenger fell from her seat and required medical attention. The National Highway Transportation Safety Administration (NHTSA) then required that all EasyMile vehicle service be suspended on all AV shuttles in the country until NHTSA could conduct an investigation of the causes of the incident.

On May 22, 2020, NHTSA announced that EasyMile could return to passenger service following safety enhancements recommended by EasyMile that included installing seat belts.[6] However, even with these additions Smart Columbus decided that it would not resume passenger service citing the COVID-19 pandemic and mandatory shutdown.

Following the February 20th incident and affected by the new context of the COVID-19 pandemic, Smart Columbus evaluated alternative services to deploy the Lined LEAP pilot program and decided to repurpose the Linden LEAP as a food delivery service for the South Linden neighborhood. The South Linden portion of the route was redesigned for the new delivery service to limit the number of stops and to travel along a linear route. The new Linden LEAP food delivery pilot is now an extension of the St. Stephen’s Community Food & Nutrition Center pantry where the AV shuttles deliver food boxes to the Rosewind Estates Community Center on Monday-Friday from 12pm-3pm.[6]

The Linden LEAP helps address barriers to food access by eliminating the half-mile walk residents otherwise needed to make carrying groceries from the St. Stephen’s food pantry to the nearest bus stop. Food barriers will continue to be an issue in the South Linden neighborhood, especially now that K-12 schools in Columbus are limiting the number of days kids will be at school, limiting access to subsidized school meals.[9]

The EasyMile EZ10 shuttles are equipped with a ramp that facilitated people with disabilities’ access to the AV shuttle during the three weeks of passenger service in February. As the Linden LEAP program evolved into a food delivery service, the shuttle ramps are deployed to connect the shuttle to the updated concrete landing pads to help EasyMile’s shuttle operators and food pantry workers to load and unload boxes from the St. Stephen’s food pantry, as pictured above. [1] The food items typically consist of grains, meats, shelf-stable foods, fresh fruits, vegetables, and dairy products. In April 2020, the food pantry served close to 1,000 new households. The St. Stephen’s food pantry has seen a 461% increase from food pantry usage within the last year.[10]

The RFP outlines that Smart Columbus, alongside EasyMile, will collect data on ridership, stop departure times, vehicle miles/hours traveled and route-trips served, battery performance, rider satisfaction, and any disengagements by the operator to inform the reporting requirements. The shuttles had implemented Dedicated Short-Range Communications (DSRC) to communicate with roadside equipment to receive Signal Phase and Timing (SPAT) and map data.[4] Smart Columbus also provides access to a series of geographic databases for the Linden LEAP deployment based on data provided by EasyMile.

Smart Columbus developed and administered a passenger experience survey until the suspension of the passenger service in February 2020, and it is developing a separate survey to collect data for the delivery service deployment. Even though ridership data will not be available due to the discontinuation of passenger service, the other metrics are still relevant and will be useful for evaluating this project and can serve as a reference for future AV pilot projects.

The Linden LEAP AV shuttle is a one-year demonstration project to test and learn how autonomous vehicle technologies can complement public transit and address mobility gaps equitably. Even with the Linden LEAP AV pilot only operating for three weeks in February, the food delivery program it became is still meeting the goal of empowering community residents in South Linden. With many Americans facing hardship from the pandemic, Linden LEAP continued to serve the residents of South Linden to make sure people had access to food. This was an innovative approach for the pilot in response to the pandemic. The Smart City Initiative was granted to Columbus to address mobility challenges and this AV pilot is doing just that with a first-of-its-kind food delivery route for the South Linden residents. Smart Columbus is applying innovative autonomous technology and is using this technology to help address social-equity concerns within the community.