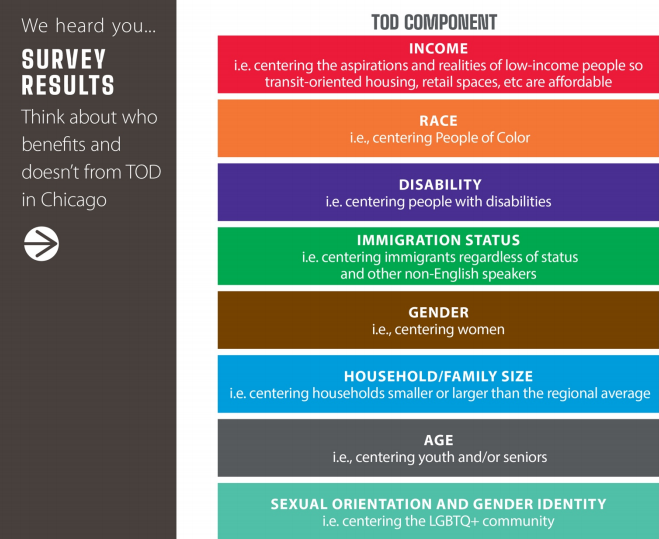 The ETOD work group members were asked to provide input via a survey to prioritize different equity components. This chart shows how each was ranked by those who responded.

Chicago has released its first ever Equitable Transit-Oriented Development (eTOD) plan and shared it with the public for comments and feedback. The eTOD plan was mandated by the city’s 2019 amendment to the Chicago TOD ordinance, which included an investigation into the TOD disparities. The plan was developed in partnership with Elevated Chicago and outlines, eTOD as “development that enables all people regardless of income, race, ethnicity, age, gender, immigration status or ability to experience the benefits of dense, mixed-use, pedestrian-oriented development near transit hubs. ETOD elevates and prioritizes investments and policies that close the socioeconomic gaps between neighborhoods that are predominately people of color and those that are majority white.” The need for an eTOD plan in Chicago is based on several statistics such as:

Recommendations for the plan are organized into three strategies priorities:

These priorities hope to result in outcomes including Anti-Displacement, Climate Resilience, Community Reinvestment, Desegregation, Economic Growth and Recovery, Health Equity, and Wealth Building. The city believes that achieving some of the recommendations will require multiple departments and stakeholders to be involved.

Roadmap for the Future of Transportation and Mobility in Chicago, Illinois 2019