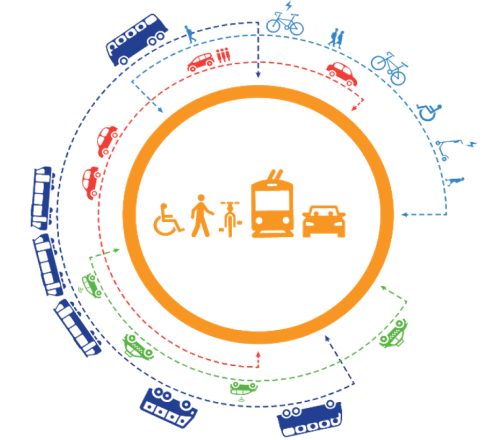 Today we have more ways to get around our cities than ever before—from bikesharing to scooters, carshare to ridehailing. But the many benefits of this expanding menu of options can only be realized if they are integrated into a coherent network of efficient transportation options that lets people get where they need to go using whatever mode makes the most sense for them on a particular trip. Enter the mobility hub—a place where people can seamlessly connect with multiple modes of transportation in a safe, comfortable, and accessible environment. 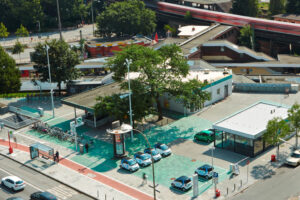 In Europe, hubs like this one in Hamburg have connected people and transportation for over a decade.
The Shared-Use Mobility Center studied some of the most innovative examples for the 2018 FHWA report Shared Use Mobility: European Experience and Lessons Learned. View it at: https://international.fhwa.dot.gov/sum/fhwapl18026.pdf

Pioneered in Germany and found today throughout Europe, mobility hubs provide physical integration among modes by co-locating carsharing, bikesharing, and other shared-mobility services close to public transit stops and large residential developments. With their physical presence and clear, prominent branding, these spaces offer visibility to and connection between public transit and shared mobility services that in turn support multimodal living and reduced dependence on personal cars and solo driving. 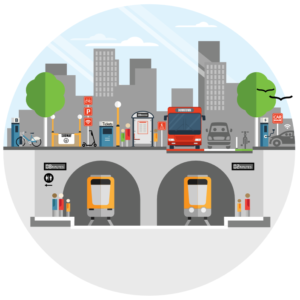 Additional features to expand use include: 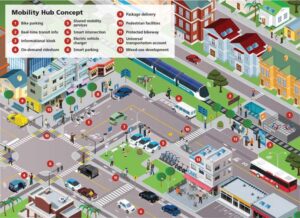 Early concept of mobility hubs developed by the San Diego Association of Governments (SANDAG). Modes and terminology continues to evolve. SANDAG is now developing a plan to build out a network of mobility hubs.

While there’s no universal definition or description of where a Mobility Hub should be located or what it should entail, there are common themes. Several communities have put their own spin on the description, important features, and siting principles of mobility hubs, including Metrolinx in Toronto; LA Metro; and the San Diego Association of Governments. Leaders in Denver, the Twin Cities, Seattle, and other cities are following suit. Few North American regions have progressed significantly on these plans.

In addition to a transit station or bus stop, planning for mobility hubs should consider the immediate walkable area (within about one quarter mile) so that multiple modes can be co-located and it can be comfortably accessed on foot, bike, or other non-auto transportation. The location of a viable mobility hub can vary according to its underlying goals—as well as space and density considerations. For instance, it can be a priority to locate a hub at a transit-oriented development served by at least one high-frequency transit line.

Design elements of a mobility hub will differ according to nearby land use, available space, and the role a station plays within a broader transit network.

Mobility hubs can be classified into four groups, based on the type of transit service available at that location and how the space fits into the context of the surrounding community:

A branch hub is a point of entry into a high-frequency transit network, typically outside of a region’s core. These locations are often, but not exclusively, found in lower density and less walkable communities and are served by a limited number of connecting routes. Branch hubs can support services that help people cover the first or last mile of their trip. Their surrounding area may require traffic calming to support non-motorized transportation.

A trunk hub is situated closer to the core of the high-frequency transit network, as opposed to on the periphery. These locations are served by multiple connecting routes and are routinely part of more developed and walkable communities that are likely to have a higher density than those on the region’s outer edge. Areas with purely urban land use host trunk hubs, as do many with a mix of urban and suburban features, and some dense suburbs. As a function of this density, trunk hubs are suited to host micromobility services such as bikeshare and scooters.

Destination hubs can be either branch or trunk varieties. The designation is influenced by whether or not its location stands on its own as one that people travel to and gather at for non-transportation related reasons year round. A destination hub is proximate to several attractions, such as retail, educational institutions, hospitals, or cultural attractions. Trunk hubs are more likely to serve a destination function, but branch hubs can as well, such as airports, stadiums, or shopping malls.

Hubs without a clear destination function, especially those that largely serve areas without regional significance, are designated as local hubs. Again, while these are more likely to be of the branch type, a trunk hub can also serve largely local functions, such as a neighborhood commercial area at the intersection of several high-frequency bus lines. A local hub should have a longer list of design treatments to call attention to and support its status as a place.

Examples from the Twin Cities

The Twin Cities Shared Mobility Action Plan, produced by SUMC in 2017, recommended that local leaders plan for and build integrated mobility hubs, focusing on implementation of the hubs alongside transit capital and service improvement projects. The following examples are from locations with high projected population or job growth and high potential to support shared mobility. The examples approximate current and near-future infrastructure improvements and are illustrative, not absolute. Community engagement is crucial throughout the process of creating mobility hubs. 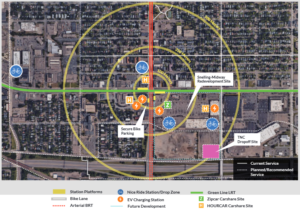 At the intersection of the light rail line between downtown Minneapolis and downtown Saint Paul and a high frequency BRT line, Snelling and University currently hosts local commercial activity. The area includes a bikeshare station, two sites for EV charging, and a carshare parking spot that will be developed into EV carshare. The light rail station is partially covered, with heat lamps and seating. While this site features a light rail stop and BRT line, similar infrastructure could support many sites with two or more high frequency bus stops. The area will soon expand as a destination as a 34.5 acre redevelopment project is underway that will include a major league soccer stadium. It would benefit from enhanced amenities such as secure bike parking and dedicated micromobility parking, a drop off/pickup zone, drinking fountains, and restrooms. 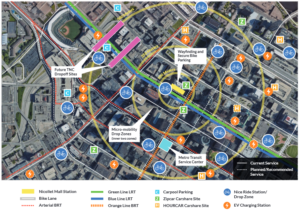 Located in the heart of downtown Minneapolis on a heavily trafficked pedestrian mall, this area is served by two light rail lines, multiple high frequency bus routes, with four BRT lines planned for the near future. There are many nearby destinations, including office buildings and shopping. Bikeshare and scooters are amply available. A gift shop adjacent to the transit stop allows visitors to purchase transit passes and obtain local information. While the area could host EV fast charging and expand the hours at which staffed customer service is available, in most regards this is a “naturally occurring” fully functional mobility hub. 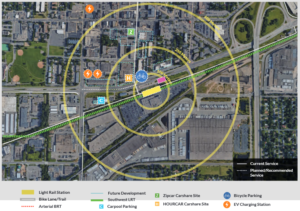 Map of branch local hub at the Downtown Hopkins Station

A two block walk from downtown Hopkins, MN, this site will host a stop for the planned Southwest LRT line, a south and westward extension of the Green Line from Saint Paul to Minneapolis. Located adjacent to the Minnesota River Bluffs regional trail, the station’s park & ride lot will be converted into a public plaza, and it will feature a nearby ‘kiss & ride’ for dropoffs. The station will host informational kiosks and bike racks and include a sheltered passenger waiting area. Plans call for mixed-use development a block away from the site. The site would benefit from long-term bike parking, offsite carshare and EV charging, carpool priority parking, wayfinding to attractions in downtown Hopkins, and activities in the plaza. 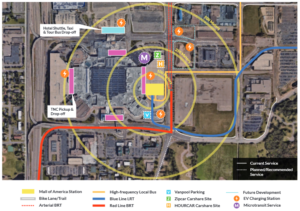 The Mall of America is among the busiest transit hubs in the state of Minnesota. It hosts a light rail terminus, a high-frequency bus to downtown Saint Paul and eight additional local bus service routes and EV charging. In 2019, leaders broke ground on a $25M renovation to the transit center that will include improved lighting, a family restroom, emergency telephones, real-time departure signs, and important pedestrian safety improvements. The hub could further be improved with traffic calming for bicycle and pedestrian connections, bicycle amenities, added carshare service and parking, DC fast charging, TNC/taxi pickup and dropoff zones, and added shuttle service to nearby employers.