Transit is a lifeline to communities across the United States, but it does not always efficiently bridge its customers to important destinations and resources. Depending on the time of day, ridership on fixed-route buses can be low, burdening a transit agencys’ resources. At other times and places, customers living in disinvested neighborhoods cannot easily access fundamental resources like jobs or grocery stores. These were issues that the Central Midlands Regional Transit Authority (aka. The COMET) in Columbia, South Carolina sought to address when it formed The COMET On The Go! program in 2019.

The COMET On The Go is a partnership with two transportation network companies (TNCs), Lyft and Uber, that consists of two components: COMET @ Night and COMET to the Market. Through COMET @ Night, The COMET customers can request subsidized, shared TNC rides at night as long as their route mimics that of a fixed-route bus. During the day, customers living in food deserts—areas lacking adequate access to grocery stores—can use COMET to the Market to request subsidized, shared TNC rides to and from designated grocery stores that provide fresh produce. 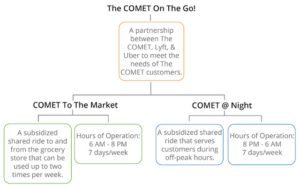 Description: Image explaining The COMET On The Go and its components, COMET To The Market and COMET @ Night. Click on image for full view. Credit: Shared-Use Mobility Center

Through The COMET On The Go and subsequent initiatives, The COMET’s role as a regional transit agency evolved and expanded. Not only does the COMET provide important fixed-route buses that transport customers across the Columbia metropolitan area, but it actively looks to tailor its services to the needs of its communities. This case study explores how The COMET On The Go has transformed and inspired the creation of other mobility offerings at The COMET. It also gives insights into how The COMETs’ partnerships with Lyft and Uber developed over time. While both TNCs are valuable partners with COMET, professionals at the transit agency realized a need to establish clear guidelines in their agreements to ensure their partnerships served the public interest. Overall, understanding how The COMET On The Go operates, along with other mobility programs at The COMET, can help transit agencies adapt services to their customers.

History and Goals of the Program

The COMET On The Go was formed in 2019 to address two problems: to replace cost-inefficient nighttime bus routes and to connect customers living in food deserts with fresh produce. Notably, many bus routes had an average of 1.5 passengers or less at night and Columbia has a relatively high poverty rate; it is estimated that 22.5% of persons live below the poverty line compared to 13.9% of South Carolina residents overall. [1, 2] This high concentration of poverty correlates with many census tracts in Columbia being designated as food deserts by South Carolina’s Department of Health and Environmental Control. [3]

Rather than issuing a request for proposals (RFP) and procurement process, The COMET invited taxi and transportation network companies already operating in the Columbia area to participate as service providers in The COMET On The Go as long as they met the agency’s requirement that program rides be shared.

While the procurement process offered some efficiencies, there were still a few obstacles in the process. Taxi companies opted not to participate as they lacked the vehicle and technological capacity of TNCs. If taxis participated in The COMET On The Go, passengers were expected to have 30 to 60 minute wait times versus the much quicker TNC response times. This reduced the potential partners to the two large TNCs: Uber and Lyft. On top of this, one of these companies sought to have exclusive participation in The COMET On The Go. However, this conflicted with the interests of The COMET, as the transit agency was looking to expand mobility options for its customers, not simply outsource its operations to a ridesharing provider. Fortunately, both Lyft and Uber ultimately agreed to participate in the program, which helped to meet regulatory requirements related to Rider’s Choice. With Rider’s Choice, The COMET could forgo drug and alcohol monitoring of drivers so long as the agency gave customers a choice of at least two mobility operators.

The COMET On The Go has only changed minimally since it first began operations. At the onset, riders would receive $5 subsidies for each of their rides, be it through COMET @ Night or COMET to the Market. While the program has experienced some ridership challenges due to the COVID-19 pandemic, The COMET was able to allow rides to be single-party through a temporary Federal Transit Administration (FTA) waiver to adhere to social distancing protocols, helping to limit the risk of virus transmission between customers and drivers. In January 2021, The COMET also upped its subsidy from $5 to $8, easing out-of-pocket costs to The COMET On The Go customers and furthering its partnership with Lyft and Uber.

COMET @ Night and COMET to the Market are designed to operate at separate times of the day so their services complement one another. COMET @ Night operates from 8 PM to 6 AM and follows the same fixed-bus route service area. Customers can apply a promo code, which changes on a monthly basis, into either the Lyft or Uber apps. These promo codes are advertised solely on COMET buses so as to limit use from people who do not traditionally use public transit.

COMET to the Market rides are available from 6 AM to 8 PM and are geofenced to serve customers living in food deserts, areas identified through from the South Carolina Department of Health and Environmental Control as lacking a full-service grocery store. Through geofencing technology, rides are only eligible to receive subsidies if they start or end within a food desert and an approved grocery vendor. Currently, there are twenty-four approved fresh food markets. Customers can only use The COMET to the Market twice per week, as it is intended for rides to and from a grocery store. [4]

When The COMET On The Go first began in 2019, ride fares were subsidized at $5. In January 2021, the subsidy increased to $8, further offsetting out-of-pocket ride costs for its customers. While rides have to be shared (UberPool or Lyft Shared) in order to be defined as transit through National Transit Database reporting requirements, The COMET worked with FTA to allow for single-party rides during the COVID-19 pandemic to help protect passengers and drivers.

The COMET, Lyft, and Uber all played a role in marketing their services to the public. As a transit agency, COMET did a combination of advertisements through print, billboards, radio, newspapers, e-blasts, social media, and presentations to social service providers and agencies. Notably, The COMET was careful to only offer the promo/discount code for COMET @ Night on their fixed-route buses. This was intended to tailor the program’s marketing to people who use public transit.

Since people without mobile phones and bank accounts also had difficulty in requesting rides through The COMET On The Go, staff at The COMET worked to educate members of the public about the Lifeline program, a federal program where low-income consumers can get discounted phone service, and about Visa/Mastercard and Uber debit/gift cards available for purchase through local retailers.

The COMET is providing complimentary accessible service through DART (Dial-a-Ride Transit), which also offers nighttime service. In addition to the existing day service, people can request point-to-point wheelchair accessible rides from 8 PM to 6 AM and can expect a pickup within one hour. Fares for DART’s nighttime service amount to $10. This program is also available during the COMET to the Market hours to ensure full accessibility for both programs.

While The COMET’s partnership with Lyft and Uber has been popular with its customers and generally viewed as successful, agency staff had to be clear with the TNCs about their expectations in order to ensure that The COMET On The Go served the public interest.

At first, the TNCs did not want to offer their shared-ride services (Lyft Shared and UberPool), afraid that they would not be as profitable as their single-party rides. In order for The COMET to receive FTA funding for The COMET On The Go, the agency stipulated that eligible program rides could only be through Lyft and Uber’s ridesharing services; passengers could only receive fare subsidies through COMET @ Night and COMET to the Market if they are willing to have other parties be picked up or dropped off en route.

COMET on the Go and Beyond

Like most mobility and transit programs across the United States, ridership for The COMET On The Go dropped in response to COVID-19. Leading into the pandemic; however, The COMET On The Go had positive impacts both in the community and for the transit agency. In December 2019, COMET to the Market had its highest ridership with 3,006 rides; COMET @ Night observed its highest ridership the month before with 1,464 rides. Since beginning operations, The COMET has replaced 12 of its nighttime fixed bus routes, averaging a ridership of about 1.5 passengers or less and costing about $335,000, with COMET @ Night for less than half the cost. At the beginning of 2021, the total budget for The COMET On The Go doubled from $150,000 to $300,000 as a result of FTA matching the local dollars that fund the initiative. As a result, subsidies for The COMET On The Go rides increased from $5 to $8, decreasing the out of pocket cost for customers.

Description: Chart representing ridership over time on The COMET On The Go!
Credit: Shared-Use Mobility Center with data provided by The COMET

Outside of The COMET On The Go, The COMET has launched other mobility programs that facilitate peoples’ transportation journeys:

Like many transit agencies serving small metropolitan areas across the United States, the Central Midlands Regional Transit Authority faced the challenge of efficiently serving its customers most in need. Through The COMET On The Go, The COMET found a way to enhance mobility options for people commuting at night or living in food deserts, while ensuring that its partnerships with transportation network companies met a strict set of conditions. These programs marked a paradigm shift for The COMET, from its role as just a transit agency to a mobility operator that oversaw a diverse range of transportation services. Beyond the COVID-19 pandemic, it will be important to observe how The COMET On The Go evolves in relationship to the COMET as an agency. Notably, The COMETs’ fixed-bus routes are still the agency’s flagship transportation service, offering 2.8 million passenger trips in fiscal year 2019 and 2.4 million passenger trips in 2020. The COMET On The Go’s ridership is small compared to the agency’s bus ridership, demonstrating the limits of such a program.

While microtransit and rideshare partnerships can play a significant role in improving peoples’ mobility options, public transit remains a lifeline to communities. The COMET did not implement its alternative mobility programs, like The COMET On The Go, as a replacement for public transit; instead, COMET @ Night and COMET to the Market are designed with very specific needs in mind. With its fixed budget of $300,000, The COMET On The Go is also not designed to exist on the same scale as Columbia’s transit system overall. Instead, The COMET On The Go, along with other mobility programs like PUP, Blue Bike, DART, and the suburban microtransit pilots are intended to create an ecosystem where people have an array of transportation options alongside fixed-bus routes, empowering them to use shared-mobility to fully meet their needs.

Listen to an interview with John Andoh who oversaw the implementation of The COMETs’ mobility programs. 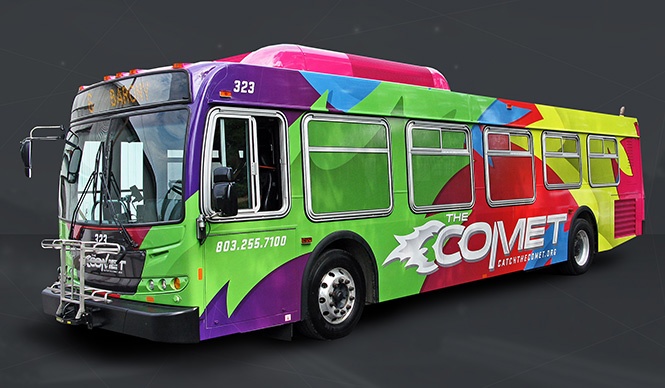