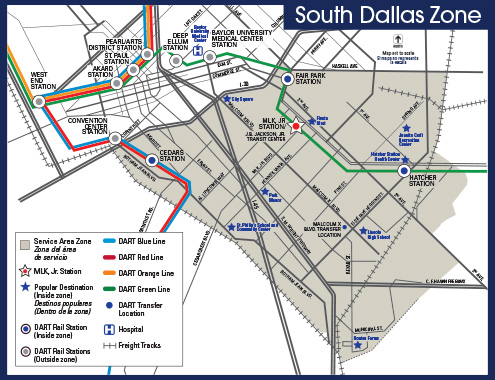 Dallas Area Rapid Transit’s (DART) on-demand door-to-door microtransit service, GoLink, has expanded to the South Dallas/Fair Park area for a six-month pilot period. The transit agency determined the need to pilot GoLink after surveying 200 residents across the ZIP codes of 75210 and 75215. South Dallas has strong levels of transit service, with four light rail stops, ten buses routes, and an AllTransit score of 9.3/10; however, surveyees indicated that bus travel for short trips to places like grocery stores were inconvenient. During the pilot period, the fleet for GoLink in South Dallas will only consist of one ADA taxi vehicle, funded through a $50,000 budget. Customers can request GoLink rides by phone or through DART’s app, GoPass, and can pay through the app or with their GoPASS Tap card. Standard fares on GoLink are $2.50, the same for a one-way ride on a DART bus. Operating hours are from 9 AM to 4 PM, Monday through Friday. Customers can also get discounts through UberPool, Uber’s shared ride service, if connecting to or from public transit stops within the 8.5 square mile South Dallas GoLink zone.

Through this effort and others, DART is working toward a regional mobility as a service (MaaS) platform. GoLink currently operates in 16 other neighborhoods throughout the Dallas metropolitan area. While GoLink operates in many suburban areas, like Plano, where transit service is limited, this pilot in South Dallas is significant because the neighborhood is already well served by public transit. GoLink in South Dallas can be a valuable tool for customers in need of additional mobility options during the work day, particularly during rush hour periods. GoLink is intended to provide customers with a new mobility solution during a time frame when public transit might not be convenient.