This Seattle Department of Transportation report looks at the first half-year of Seattle’s dockless bike pilot. The evaluation period is from July-December 2017, and includes both an analysis of the use data and qualitative data from email surveys and focus groups. The report contains:

As the map below illustrates, the bikeshare trips were concentrated in the central and University districts, though SDOT was surprised to find heavy use in a few other outlying areas, including the industrial corridor. Use was largely during the afternoon peak/rush hours, and 75% of the users used them to access transit. The total number of dockless bike trips between July-Dec 2017 totaled 468,000. 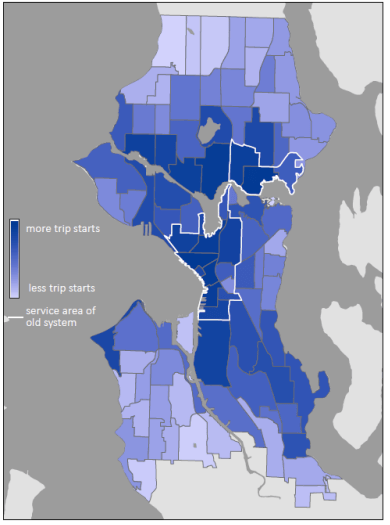 Demographics of users skewed male (62%/38%) and between 25-44. The proportion of city population that has tried bikeshare is very even, with the African-American population respondents leading at 36%, Asians and White respondents were both at 32%. However, the use in some of the highest-need (by mobility equity analysis) neighborhoods at the margins of the city boundaries. The study proposes additional re-balancing.

The complaints from surveys and customer service calls were overwhelming about dockless bikes obstructing the public right of way in some manner. The study notes some designated parking areas already piloted, which will be expanded in the revised permitting period.