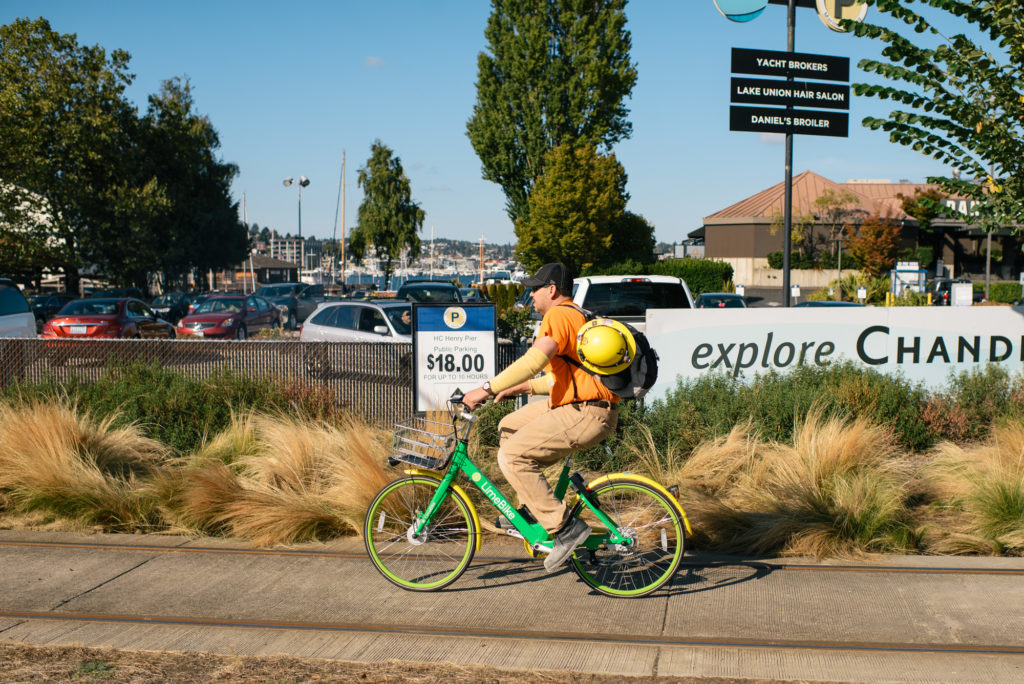 In cities across the country, free-floating, or dockless bikesharing, is making bicycling more accessible and convenient. Whether for a commute, as recreation or to run a spontaneous errand, shared bikes allow people a dynamic new way to access healthy and environmentally-friendly transportation. Their popularity and potential to transform the way we move around cities has led to rapid expansion of dockless bikeshare – often in advance of the development of rules to maximize benefits and minimize disruption. In an effort to strike an appropriate balance, Seattle created a permitting system to enable and regulate dockless bikesharing within the city.

Seattle is currently running a permitting program for private, dockless bikesharing in the city. By establishing a regulatory framework, the city hopes to harness the accessibility and reach of dockless bike companies, while working to remedy common complaints and avoid pitfalls. After an initial pilot program that ran from July to December 2017, the city council approved a plan to double the number of bicycles in the city from 10,000 to 20,000.

The most recent permit requirements include rules on a variety of issues, including:

–Bike Design: All bikes must comply with federal design standards and must additionally include lights and reflectors, a bell, locking abilities and GPS tracking.

–Parking: The requirements establish rules on where bicycles may be parked (either in a bike corral or upright in the “furniture zone” of the street, which buffers the pedestrian walkway from the road). These rules also place responsibility on the vendor to safely remove or repark improperly placed bicycles.

–Rider Education: Each vendor must establish a “rider education plan,” which will cover helmet compliance, traffic laws and proper parking.

–Marketing: Vendors must ensure that their marketing has the potential to reach all people in the city. In service of this requirement, vendors must provide the Seattle Department of Transportation (SDOT) with a one-page document in some of Seattle’s most commonly spoken languages that explains their business model, available cycles, pricing, and all possible rental methods.

–Data Sharing: Vendors must give SDOT access to real-time data and also provide weekly updates on trips taken on their bikes. Required data includes information on the location of each bike, trips taken, where the vehicles have been parked, safety incidents, maintenance records and the number of riders served. Each vendor is also expected to notify users of the data it collects.

History of the Program

Following the closure of Pronto!, Seattle’s discontinued docked bikeshare program, city officials were approached by dockless bikeshare companies looking for a new city to begin operations. Seattle offered perfect ground, as companies didn’t have to compete with an established bikeshare system and the city was looking for ways to fill the mobility gap left in Pronto!’s absence.

However, SDOT had learned from the experiences of other cities that unregulated bikeshare programs could lead to problems. To minimize those issues, Seattle created the first permit program in the nation that aimed to provide a regulated and structured marketplace for dockless bikeshare companies.

The planning process was initiated within SDOT. After the bikeshare companies had agreed to the terms of a pilot program, dockless bikesharing was quickly rolled out throughout the city. In the following months, the city consulted with stakeholders and advocates across the city, conducting 12 meetings with various groups during the first year. They also commissioned a statistically valid online survey of Seattle residents and gathered comments through other surveys and email.

The pilot was originally slated to last for six months, but was allowed to continue after some initial success. In July 2018, the city council approved a plan to make it a permanent city program with permits that could be annually reviewed and renewed.

Seattle hopes to establish clean, active, affordable and accessible transportation through the bikeshare program. In its evaluation of the pilot, the city collected ridership numbers and usage metrics to compare with bike share systems across the country. The city initially wanted to meet industry performance standards for station-based bikeshares, but they found that the differing nature of dockless bikeshares meant that some of these standards would have to be adjusted. They also frequently compared their metrics to Pronto!, as well as Portland’s hybrid docked/dockless bikeshare program, Biketown, as these gave a more regional perspective on what bikeshares could achieve. The pilot yielded the following results:

–Fleet Size: In the five months of the pilot, the number of available bicycles increased from 1,000 to 9,450. For comparison, Pronto! had only 500 bicycles and Portland’s Biketown around 1,000.

–Trips: During the pilot, there were an average of 2,791 rides per day. During this same timeframe, Biketown averaged 1,100 trips per day and Pronto! only had 320 during the same months in 2016.

–Rides per Bike, per Day (rbd): Each bicycle in the pilot was used by an average of 0.84 riders per day, which is more than Pronto!’s 0.7, but much less than the 1.7 rbd nationwide average for docked systems. SDOT argues that this is a less helpful metric for its own evaluation, however, as the city did not make the upfront investment in the infrastructure and does not have to recoup those costs.

The bikeshare program is a fully-funded public/private partnership that requires no additional money from SDOT or taxpayers. The city uses permitting fees ($250,000 for the right to place 5,000 bicycles) to cover its administrative costs, as well as funding for designated parking areas, data analysis and opportunities to increase access through adaptive cycling initiatives.

The biggest obstacles the pilot faced were around parking, helmet law non-compliance and equal access.

–Parking: Data from the pilot showed that 30 percent of bikes were parked incorrectly and 4 percent were considered “blocking hazards,” meaning they impeded access to a walkway, business or loading zone.

–Helmet Law Noncompliance: During the duration of the pilot program there were only five reported bikeshare collisions, at an average of 0.01 collisions per million trips, and no reported serious injuries. These numbers are consistent with bikesharing nationally. However, a user survey found that only 24 percent of bikeshare riders wore a helmet, despite King County’s mandatory helmet law and educational messages from the companies. Additionally, many respondents to the public opinion survey felt like the bikeshare increased poor riding behavior.

–Equal Access: While the pilot program showed that bikes were available in areas with less economic opportunity, in some of those areas there were not enough bikes to make it a reliable mobility option. Furthermore, there were concerns that the dockless bikeshare model is difficult to use for those without access to a smartphone or a bank account.

Officials were initially worried that 85 percent of the unsolicited public comments they received expressed a negative opinion of the dockless bikeshares. However, later data from the city’s statistically valid survey showed that three-quarters of Seattle’s residents had a favorable view of the program. In its advice to other municipalities looking to start a similar permitting program, officials at SDOT advised that they look into creating a statistically valid opinion survey of the whole community, although they acknowledged that it may be a financial burden to many smaller cities.

In addition to making bikesharing available to people across economic strata, the city also wants to increase access for individuals with disabilities. Adaptive biking, which can include three-wheeled bikes, hand-pedaled cycles, recumbent cycles and others, can help fill this accessibility gap by giving riders more options. During the pilot period, no adaptive cycles were issued and conventional bicycles sometimes blocked walkway access for individuals with disabilities.

While not a problem for bigger cities like Seattle, smaller municipalities who wish to implement a permit scheme may have to scale back on their pricing and demands. As the market develops for dockless bikesharing, there is a lot of uncertainty over profitability. Building too many costs into a smaller market may drive vendors away and leave consumers with fewer options. Designing a successful permitting program therefore requires a balance of incentives and regulations, and this equation will be different for each city.

The city is currently operating the permitting program, and new permit requirements were released in November 2018. Three providers are slated to join the market in 2019 – JUMP, Lyft and Lime. Only one of these companies, Lime, was part of the original pilot project, as ofo and Spin left the market citing high permit fees. As the city council approved a plan that would allow up to 20,000 bicycles into the city, SDOT has raised its initial limit of 5,000 bikes per company to 6,666. City officials are encouraging the companies to distribute more bikes across the city in order to increase access to the program. Since ofo and Spin left the market, there are a little under 7,000 bikes left in Seattle. Lyft has yet to deploy any bikes in the city, and all the companies have had trouble scaling up their fleets due to trade tensions with China that have made it harder to procure new e-bikes. (Joel Miller, SDOT Bikeshare Program Manager, personal communication, 13 December 2018).

Despite these issues, city officials are optimistic that the three companies will eventually build up the quantity of bikes in the city and effectively meet demand for the service. SDOT has also been helping neighboring suburbs begin their own permitting processes in order to expand the reach of the bikeshares across the metro area.

Additionally, the city’s new permit requirements work to address some of the concerns that arose in the pilot. These include:

–Neighborhood Inclusion: Companies will need to make at least 10 percent of their bikes available across the three areas that had lower bike access during the pilot.

–Equal Access: The new rules state that every bikeshare company must provide at least one “low barrier rental method” for those without a bank account or smartphone. To meet this requirement, JUMP and Lime have worked with the company PayNearMe, which allows users to load cash onto their account at several 7-11 stores. Similarly, Lyft is working with community partners to sell vouchers that can then be redeemed for rides. For those without a smartphone, Lyft and Lime allow their bikes to be unlocked through an SMS text message and JUMP users can begin a ride with a personal account number or a synced transit card.

Safety: The permit application requires companies to create a “rider education plan” and to affix information about the laws and proper riding behavior to the devices. JUMP, for instance, decided to implement its rider education plan around community meetings and sponsored events.

Dockless bikesharing is poised to become be an integral part of our urban transportation landscape. But as with many new technologies, rules and refinement are often needed to ensure that the innovation is utilized to its greatest potential. Just as the implementation of traffic rules and infrastructure investment were critical components of the motor car’s rapid adoption a century ago, forward-thinking policies can help cities spread the benefits of bikesharing. The success of a structured marketplace can be seen in Seattle and in cities across the country that are now following similar models. Through smart regulation and partnerships, dockless bikesharing can help increase access to a healthier and more sustainable mobility option.

Seattle Department of Transportation (SDOT) releases a monthly report on its dockless bikeshare program, as well as quarterly summary reports. The report for Q2 (April-June) of 2019 details some of the larger trends SDOT is seeing in regards to bikeshare usage. As of summer 2019, Spin and Lime are the two private vendors operating in the city, while Lyft has been permitted but has not yet launched.