Chicago Mayor Lori Lightfoot announced recently that CDOT and the CTA will be piloting 24 hour pop-up bus lanes on two of the city’s most used bus routes, Chicago Avenue (#66) and 79th Street (#79), to reduce bus crowding and improve reliability. This change will be specifically beneficial for Chicago’s South and West side residents, home to many of the city’s essential workers who are not able to work from home and risk their safety when they spend long commutes on crowded buses. The first phase will include 7.6 miles to dedicated bus lanes on 79th street and Chicago avenue, routes which buses nearly 20,000 riders each day. The temporary bus lane pilot will continue for at least six months and additional phases will be under consideration. This installation is the most recent way Chicago is attempting to make use of the street in innovative ways during this pandemic to maintain social distancing. The city should also look out for the next set of Bus Priority Zones identified by the Lightfoot administration in 2019, which intend to provide more permanent bus infrastructure improvements such as designated bus only lanes, new pavement markings, street-level and overhead signage, optimizing of bus stop locations, curb extensions and pedestrian refuge islands in an effort to prioritize bus travel and safety. 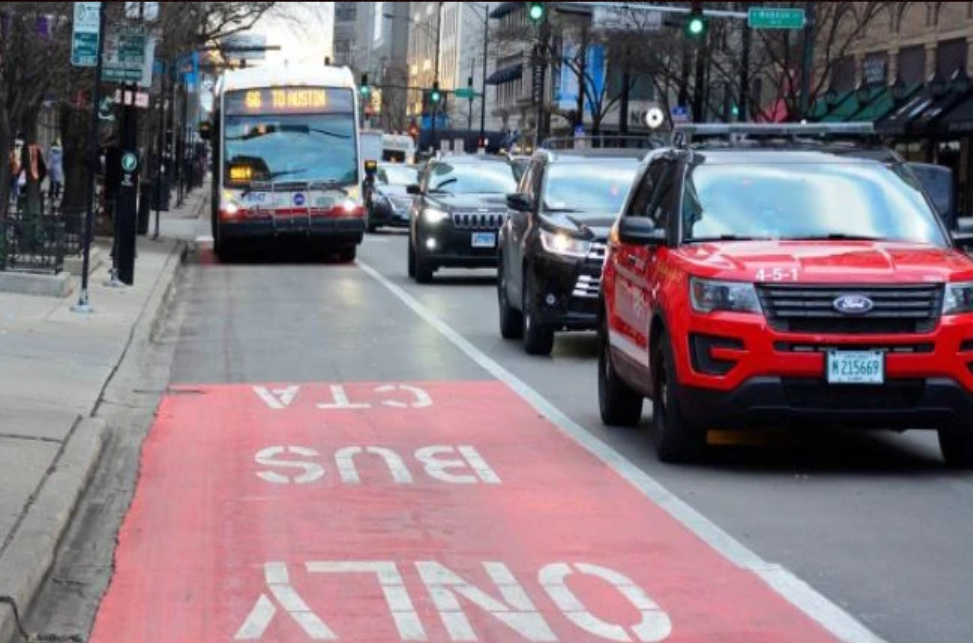 Temporary dedicated CTA bus only lanes will be installed along the #66 bus route. Image from: https://www.masstransitmag.com/bus/infrastructure/press-release/21155288/chicago-transit-authority-cta-cta-cdot-launch-popup-essential-bus-lanes-program