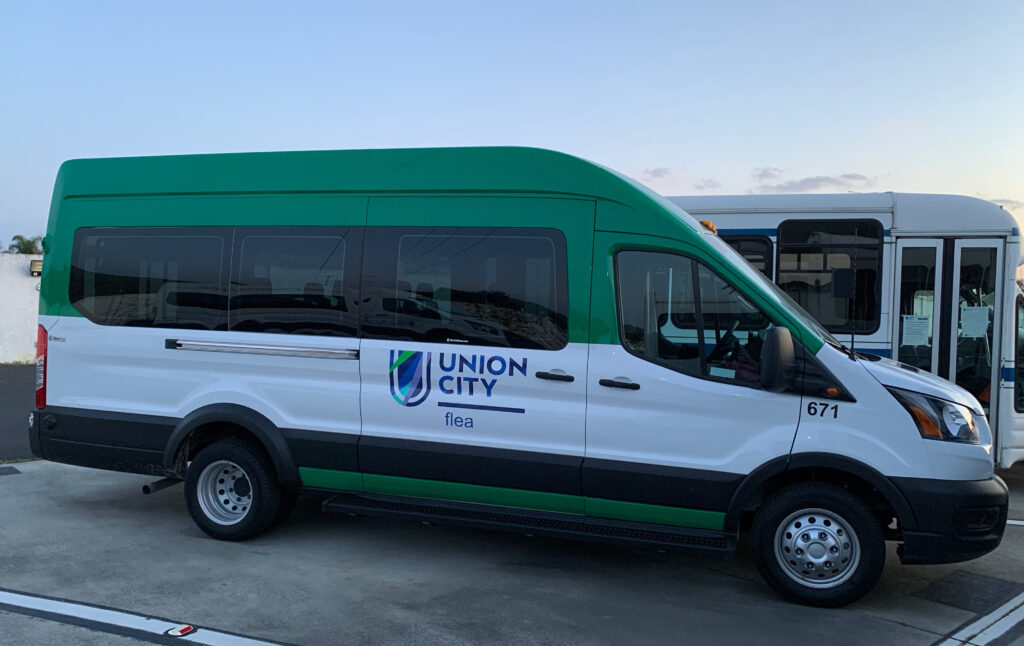 Union City Transit has restarted its microtransit service, the Flea, for a 22-month pilot period. The Flea first began operations when Union City Transit first came into existence in the 1970s. At the time, the Union City Flea consisted of a small set of dark green mini-buses that ran on fixed routes. Customers could request rides along the route by calling a dispatch line or waving down a vehicle with their hand, like a taxi. Now, customers can request to be picked up by phone or smartphone app, provided by TransLoc, from anywhere within a designated service area. The Union City Flea’s fleet consists of two 22-foot Ford Transit vans that can carry up to 10 riders. During the COVID-19 pandemic, rides will be limited to three riders at a given time to limit the risk of virus transmission between individuals. The vans will run on twenty-minute loops from 4:40 AM to 8:35 AM and from 2:40 PM to 6:35 PM on weekdays, connecting passengers to areas like Union City’s BART Station, Decoto neighborhood, and industrial business district. A single-ride fare, which amounts to $2, can be paid by cash, Clipper Card, or smartphone. Discounted fares are available to youth, seniors, and people with disabilities and transfers can be applied if customers transfer to or from other fixed-route transit options. During the pilot period, the Union City Flea is supported by a budget of $818,000, $663,000 of which comes from a grant through the Bay Area Air Quality Management District.

As one of many transit agencies in the Bay Area, Union City Transit appears to be using the Flea service as a first-mile/last-mile mobility option for its customers. Interestingly, this microtransit option operates in a manner different than many other services that have come about recently. The Union City Flea has a fixed schedule and more of a fixed route than other current microtransit services, with each route starting and ending at either the Union City BART Station or Union City’s central business district. During the 22-month pilot, it will be important to observe if this revived microtransit service is sustainable and meets the need it once did when Union City Transit first began operations nearly 50 years ago.