For users in the Denver metro area, the Uber app now offers customers a choice between transit, UberX, and Pool, integrating real-time transit data to show cost and travel time for each option on a single platform. Customers who choose the transit option can easily purchase tickets with the same payment method they use for Uber, store the tickets on their phone, and use them to board the bus or train. The app is not a multi-modal trip planner and does not allow customers to combine payment for ridesourcing and transit on the same trip.

In November 2017, Denver’s Regional Transportation District (RTD) began selling mobile tickets through an app by Masabi, which also provided the payment software for Uber. At Masabi’s suggestion and with RTD’s approval, Uber included public transit journey planning on their app in Denver in January 2019, its first ever integration with mass transit. In May 2019, they added Masabi’s integrated payment to allow some riders to buy transit tickets through the Uber app, and on June 25 the option was made available to all users in Denver.[1] RTD recognized the public relations value in the agreement, writing in the contract, “This integration will reflect positively on RTD’s branding and service orientation, and RTD’s role as a leading public transportation agency in one of the United States’ fastest growing, most livable, and most tech-savvy metro regions”.[2] In March 2019, Lyft included RTD in the Nearby Transit feature of its app. RTD makes its application programing interface (API) available to Uber and Lyft, while the TNCs control both the customer interface and the data. As of April 2019 Uber had not agreed to share with RTD the data needed to understand customer choices. David Reich, Uber’s Head of Transit, said, “With this step, we are moving closer to making Uber a one-stop shop for all kinds of transportation, from buses to bikes”.[3]

When Denver customers enter their destination in the Uber app, they see a Transit option alongside options for UberX and Pool.[5] Each shows the cost and estimated travel time for the trip. When the customer chooses the transit option, the app presents a Buy Ticket button that allows them to pay for the ride with the same payment method they use for Uber. After payment is confirmed, the digital tickets are loaded onto the phone and later used to board RTD vehicles.

While Uber’s app allows Denver customers to choose between transit and ridesourcing, it is not a multi-modal trip planner. It shows customers real-time RTD bus and train schedules, directions, fares, and walk times to and from transit stops, but it does not allow planning of trips that combine ridesourcing and transit on the same journey.

(Lyft’s “Nearby Transit” feature allows customers to see arrival times at nearby transit stations but is not a trip planner—it does not offer a side-by-side comparison of Lyft, transit, and other travel options.)

The American Public Transportation Association (APTA) described the pilot project: “The technological work behind the integration was undertaken by Uber and Masabi. The Masabi Justride platform’s Software Development Kit (SDK) allows public transit agencies to extend their sales channel to third party apps. For that reason, RTD did not need an agreement with Uber to enable Masabi to provide tickets on the Uber app; a simple, no-cost amendment to the RTD-Masabi contract was sufficient. RTD retains the right to terminate the partnership by notifying Masabi of its desire to do so.” [4]

The RTD’s trip planning app doesn’t include ridesourcing because Uber and Lyft have not made their APIs available to the transit agency. Under “travel preferences,” the default is travel by walk and transit, but you can also select bike and transit or “Car + Park-n-Ride + Transit.”

Uber reports aggregate data about transit tickets purchased through its app, but RTD expressed that it would like more nuanced data. For example, RTD would also be interested in knowing the location and desired routes of people who open the Uber app, consider transit, and ride with Uber. That information would allow the RTD to adapt its service to better meet customer demand—and to compete with Uber.

According to RTD’s contract with Masabi, “Masabi will cooperate with RTD, where feasible and allowed under our Contract, to negotiate with Uber for aggregate and anonymized user data for which RTD has a business need, such as click-thru rates in the Uber App” (p. 3). However, to date, those data have not been made available to the RTD [4]. To the extent that RTD and Uber compete for customers, it’s not a level playing field: one side shares its data with the other, makes it publicly available, and is subject to the Freedom of Information Act, while the other is much more reserved about what it will share even in collaborative arrangements like this one. Tonya Anderson, RTD’s Electronic Fare Operations Manager, was quoted as saying that if she could do it over again, she would negotiate a two-way data sharing agreement before launching the program.[4]

For more on data sharing, see the Shared-Use Mobility Center’s white paper, “Objective-Driven Data Sharing for Transit Agencies in Mobility Partnerships,” or read the executive summary. It offers suggestions for how transit agencies can work with private companies like Uber to provide the agency with the data it needs for effective service planning while protecting the private company’s business practices from public records laws and ensuring the privacy of their customers.

RTD’s contract is with Masabi, not Uber. The amendment to the contract that covers the purchasing of RTD tickets through the Uber app is available here. Masabi’s Justride software development kit (SDK) is embedded in the Uber app and manages the sale and authentication of purchased mobile tickets. RTD and Masabi work together to ensure that RTD’s products are presented to customers in a way that is consistent with the agency’s branding and business practices, and that the right products are being offered on the Uber app at the right price [6].

RTD already had a Justride Hub where it can manage mobile tickets for purposes of reporting, data analysis, and customer service. Tickets sold through the Uber app must be available to RTD in this Justride Hub and be distinguished from other mobile tickets. RTD’s customer service agents must be able to serve customers who purchased tickets via the Uber app, including issuing refunds and complimentary tickets through the Uber app.

The SDK must report sales data consistent with the way RTD reports its other ticket sales so it can be managed using the same business practices and so RTD can generate sales reports for tickets sold via the Uber app directly from its Justride Hub.

Masabi’s Justride SDK is responsible for the security of customer data, and Masabi can only share with Uber the data necessary to issue tickets through the Uber app and to reconcile revenue.

RTD saw integrating transit options into Uber’s trip-planning and payment app as a way to broaden its customer base by putting its offerings before people who are willing to forego their own car but may not be regular transit riders.

They also saw it as a way of enhancing the RTD’s image as being progressive and service-oriented, a national leader among transit agencies and a fitting representative of Denver’s growing tech community. [5]

As of August 2019, it is too soon to assess the program’s outcomes. SUMC will monitor the program and update this case study as program outcomes become apparent.

Uber started integrating transit schedules into its app in January 2019, and by July it claimed that the number of Uber rides that start or stop near a transit station had grown by nearly 12%.[8] Important questions remain, such as are those new trips first/last mile connections that support transit ridership, or are they competing rides that go where transit also goes? Another measure of success could also include trips between transit stops and places not served by transit.

There were no direct costs to the RTD for making transit options visible in the TNC apps; it simply shared its API. Nor was there a cost for allowing customers to purchase tickets through the Uber app; RTD’s existing relationship with Masabi made it easy to use the company’s Justride SDK to allow Uber to sell its tickets.[4] Uber and RTD agreed to an exchange of advertising services and space worth $145,000—placard advertising inside RTD buses and in-app promotions, newsletter, and targeted emails to Uber’s 250,000 active users in the region.[7]

RTD and Uber do not necessarily have the same objectives for the program. For example, Tonya Anderson, RTD’s Electronic Fare Operations Manager, says she wishes the two had agreed on clear success metrics and negotiated a mutually beneficial data sharing agreement from the outset.[4]  This is an important consideration and as public-private partnerships become more widespread it is important to have a relationship between the private operator and the public agency where both benefit from and also share in the costs and and risks.  Having discussions and a clear description of everyone’s roles at the start of a project can help to mitigate potential points of conflict in the future.

The discussions of data sharing have revealed an important point of conflict between transit agency and TNC: who owns the relationship with the customer? Uber’s trip planning app includes transit, but the RTD’s app doesn’t include ride-hailing—because while RTD shares its API with Uber, Uber has not shared its API with the transit agency. Customers who are interested in a full range of transportation options must therefore rely on Uber when planning their trips. Tonya Anderson, RTD’s Electronic Fare Operations Manager, was quoted as saying, “We at RTD would say that a customer who bought a transit ticket through Uber is an RTD customer because they bought our ticket. But Uber said ‘no, that’s our customer because they’re on the Uber app”.[4] Determining who’s customer it is becomes more important when thinking about this from a planning perspective and trying to understand transportation movement – as oftentimes the data associated with that trip and/or customer are not always shared across the public-private partnership.

As of December 2, 2020, the Regional Transportation District (RTD) and Masabi partnered with Lyft to offer scheduling and mobile ticket purchasing through the Lyft app. 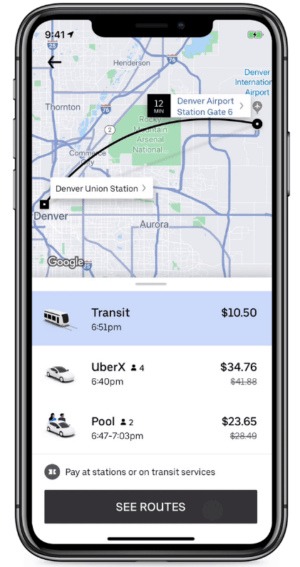