In December 2017, the City of Gainesville, FL entered into a contract with Transdev Services to develop and launch an autonomous transit system. This Gainesville Autonomous Transit Shuttle program is funded up to $2.7 million by the Florida Department of Transportation, while the University of Florida and the Gainesville Regional Transit System (RTS) are also involved in the project.

The passenger shuttle system was designed to serve as an extension of the RTS, and to connect the city’s Innovation Square, downtown Gainesville and the University of Florida campus. The system uses 12-person EasyMile autonomous vehicles (AVs), manufactured in France. Like other autonomous vehicle pilots being deployed across the US (such as the Little Roady program in Providence, RI), the route runs on a loop less than three miles in total, and speed limits for the shuttles are limited to 15 miles per hour.

Although the initial plan was to launch the shuttles in late 2018, the actual deployment was delayed due to NHTSA restrictions and requirements on AVs. The vehicles began carrying passengers in January of 2020, but service was then suspended the following month due to an incident on EasyMile vehicles in another state. Throughout the duration of the demonstration period, fares will not be collected from passengers, and a trained human supervisor will be present to supersede the vehicle’s programming if needed.

According to the Florida DOT, the primary objective of the Gainesville Autonomous Transit Shuttle pilot is to “deploy an autonomous transit system to connect the City of Gainesville Innovation District and downtown with the University of Florida campus and student housing by means of frequent transit service”.

When the request for proposals (RFP) for the program was released by Gainesville RTS in May 2017, the goals for the deployment of such a project were:

One of the stated metrics for this system is to maintain a maximum headway of 10 minutes or less for the routes. 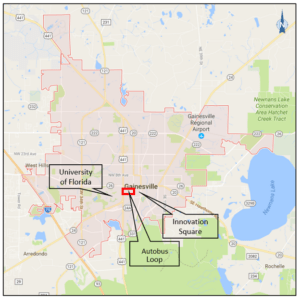 In 2016, the state of Florida passed a law to legalize use of AVs on public roads. This legislation was significant relative to other states’ AV legislation at the time because it permitted AVs to be tested without requiring a human driver behind the wheel, making Florida an attractive testing ground for AV pilot programs.

Following the legalization of AVs, the Florida DOT launched a feasibility study exploring the possibilities for AV deployment in Gainesville as part of the Florida Connected and Automated Vehicle Initiative (Florida-CAVI), and it released its findings in June 2017. This study helped guide the development of the RFP for the Gainesville Autonomous Transit Shuttle pilot, as it framed what the city and its public agency partners could likely expect from such a program.

The RFP, released May 2017, specified clear requirements for potential contractors regarding how the Gainesville Autonomous Transit Shuttle pilot would need to be operated, and what standards the AVs deployed would need to meet.

In December 2017, the City of Gainesville awarded the contract for the AV shuttle transit system to Transdev. The project was funded by a grant from the Florida DOT up to $2.7 million (Caplan, 2018). Transdev is also operating other AV projects in Colorado, California, France and the Netherlands (Delegal, 2020).

After being awarded the contract in December 2017, Transdev worked with the Gainesville RTS, the Florida DOT and the University of Florida to develop the operating plan, which initially planned for the demonstration period to begin in May 2018.

The company opted to use vehicles from the French company EasyMile, largely because Transdev was familiar with their technology and the EasyMile shuttles were deployed in similar test pilots in Europe at the time. The vehicles are 12-person electrically-powered shuttles (room for 6 standing and 6 seated), and their speed is capped at 15 miles per hour for the purposes of the pilot.

However, to be deployed in the US, vehicles need to certify that they meet the standards set by the National Highway Traffic Safety Administration (NHTSA), or they need to obtain an exemption from the Administration. Because the NHTSA does not currently have a different set of standards for AVs and for non-autonomous vehicles, many AVs – including the EasyMile shuttles selected by Transdev for the Gainesville pilot – do not meet the established requirements pertaining to steering wheels, brake pedals, and other human-centric standards. (For more on FMVSS and AV exemptions, see SUMC’s brief overview on the topic here.) As a result, Transdev petitioned the NHTSA for an exemption so the shuttles could nevertheless be deployed on public roads. Unfortunately, the 2018-2019 federal government shutdown significantly delayed this process. The vehicles were granted the exemption and approved for deployment in January 2020 for six months. Testing was conducted at a nearby business park, and then along the route on which they were to be deployed. Videos of the shuttles on the route have been sent to the NHTSA to provide additional insights on AV deployment programs.

Six locations along the designated route were selected to serve as boarding and alighting stops, some of which were already bus stops on RTS fixed routes. The shuttles are programmed to abide by regular on-street parking conditions, and to stop if they detect movement such as pedestrians, open doors or vehicles entering their path. Of the three shuttles dedicated to the pilot, two operate simultaneously, while the third charges. Throughout the pilot, fares will not be collected from passengers, and a trained human supervisor will be present to supersede the vehicle’s programming if needed.

Although the pilot initially began carrying passengers in January 2020, an incident in Ohio on EasyMile shuttles in February in which a passenger was hurt when the AV had to make an emergency stop led to the NHTSA suspending operations of all fleets carrying passengers (Marshall, 2020). The shuttles in Gainesville could have continued to operate on the route without passengers, but the RTS chose to halt operations altogether following the temporary suspension (Felts, 2020).

In regards to building out the infrastructure needed to support AV deployment, the Gainesville RTS and other regional agencies have upgraded some streetlights to include fiber technology, which enables the devices to capture data and communicate with vehicles and other devices. One on-street parking space was removed to make space for a shuttle stop along the route (Ponnaluri et al, 2028). The city has also pursued securing provisions to allow the shuttle to have the right of way or have a designated turn time at a select intersection along the route.

During the first phase of the pilot, the shuttles’ route will be limited to a portion of the route in downtown Gainesville, and the shuttles will be studied to assess how they manage features like roundabouts and unanticipated stimuli. The second and third phases will expand service to the fully planned route, extending from Depot Park to the University of Florida campus.