Dubbed the longest free transportation route in the country, the Little Roady Pilot Project is an autonomous shuttle pilot program launched in May 2019 in Providence, Rhode Island. The service uses 6-passenger electric vehicles operating autonomously on a continuous 5.3-mile loop between Providence Station and Olneyville Square. Customers can board at either ending station, or at any of the 12 stops in between, and rides are completely free. The vans are autonomous, but each has an attendant on board. The program is operated via partnership with the Rhode Island Transportation Innovation Partnership (TRIP), a multi-agency effort to explore new technologies in transportation, with partners including the City of Providence, the Rhode Island Public Transit Authority (RIPTA), and the Quonset Development Corporation. Since its launch, ridership has averaged around 120 people daily, and typically between 4-6 vehicles are deployed at a time. [1] 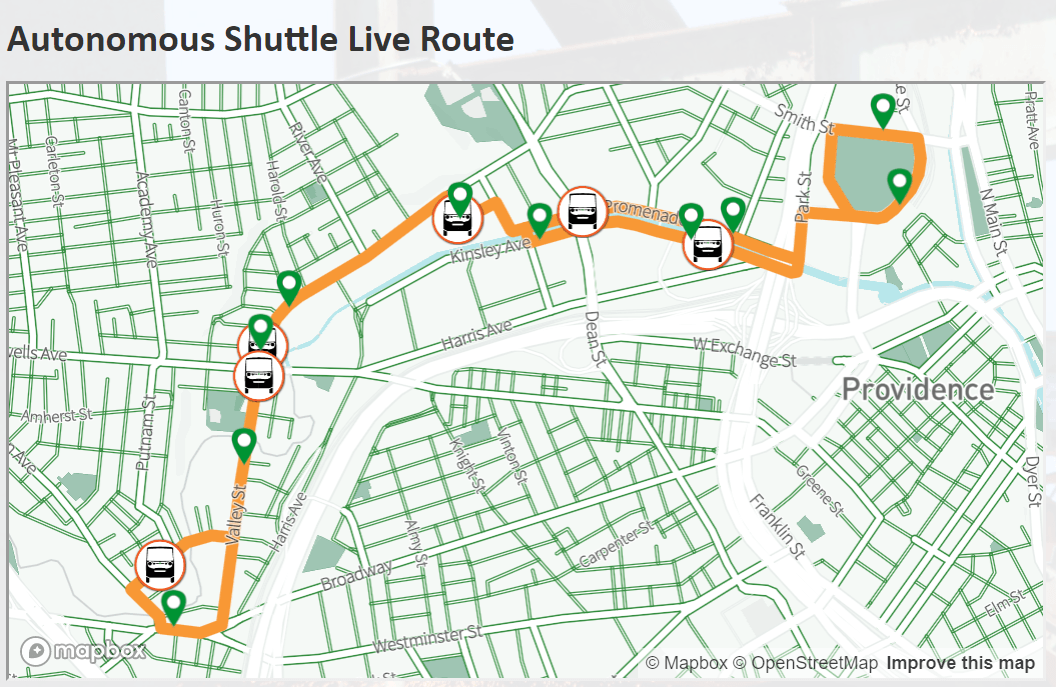 The program was developed in response to a RIDOT request for proposals released in 2018 for vendors to enter into a public-private partnership for a mobility pilot featuring autonomous vehicles. Submissions required potential partners to describe their plans in regards to marketing, implementation, service, scalability, risk and mitigation, deployment, public education, communications, and coordination, among other plans.

In fall 2018, Michigan-based company May Mobility was awarded a 12-month contract with TRIP to operate a free service using its autonomous vans. Under the terms of the contract, RIDOT would contribute $800,000 for the first year of operation, while another $300,000 coming from the Federal Highway Administration and matching state funds. [2] A $500,000 grant awarded by the R.I. Attorney General’s Office as part of a settlement with Volkswagen for its diesel fuel emissions scandal would also support the program.  Should TRIP choose, the agreement with May Mobility may be extended for an additional two years after the first 12-month pilot concludes.

The goals for the autonomous vehicle program were laid out in the RFP released by RIDOT in 2018. The pilot was intended to reach the following objectives:

The RFP includes no objectives relating to frequency of use, nor operating costs.

After extensive testing of the vehicles at the nearby Quonset Development Corporation’s business park, the pilot launched to the public in May 2019. The service operates seven days per week from 6:30am to 6:30pm, and it runs on a continuous 5.3-mile loop through Providence. The roads used have speed limits of up to 25-miles per hour, and the route includes public roads in both commercial and residential areas. In part, this route was selected because the service is primarily framed as an experiment, rather than a new service: the pilot is intended to be a “research and fact-finding project to learn about autonomous vehicles and how they fit into public transit and long-term transportation plans for Rhode Island and other states”. [3] As a result, by seeing how the autonomous vehicles operate in different types of service areas (such as in commercial versus residential) and respond to different stimuli, more information can be gleaned on how to plan for future autonomous programs. In addition to shedding light on autonomous vehicle programs in general, the Little Roady pilot project also aims to provide a first/last mile service to passengers. At both ending points of the route, customers can connect with RIPTA buses, while both MBTA and Amtrak trains leave from Providence Station. Shared bike and scooter stations are also available along the Little Roady route.

Use of the service is free, and no sign-up is required. Customers can simply head to one of the designated stops, and board a shuttle when it arrives. To see the current location of vehicles and their arrival times, customers can access an online interactive map. If a shuttle is full, the wait time for the next shuttle is approximately 10-15 minutes. Traveling the full route from Providence Station to Olneyville Square (or vice versa) typically takes 20 minutes. Minors under 18 must be accompanied by an adult, and customers must provide safety seats for babies and toddlers. Pets are not allowed, and there are no bike racks available.

The success of the program will be measured based on the performance metrics laid out in the RFP released by RIDOT.

Based on the RFP, May Mobility is required to provide RIDOT access to a digital database with live statistics on the program. Some of the data that must be maintained include the miles driven in autonomous mode versus total miles driven; on-time performance; average wait times; costs per hour of operation and per passenger; and daily ridership information.

Throughout the pilot, a research team comprising of Brown University, 3X3 Design (Brooklyn-based urban planners), STAE (data firm), Bits and Atoms, and the Massachusetts Institute of Technology will be analyzing data about ridership and workforce and environmental impacts. RIDOT is also working with the Amalgamated Transit Union to better study the Union’s concerns in regards to this pilot. [4]

Although the Little Roady pilot is part of the early generation of autonomous vehicle pilots, it distinguishes itself in how it is operated.  It will be important to monitor the lessons learned in these early pilots to see how they can inform supportive and regulatory policies around use, access and safety of the mode. As a multi-passenger shuttle, the Little Roady can further help to inform the role of shared + autonomous as a public transit mode and how it can help to meet the mobility needs within a community. The Little Roady also connects to other transportation modes, which could enable evaluators to see how it might work within a multi-modal context. 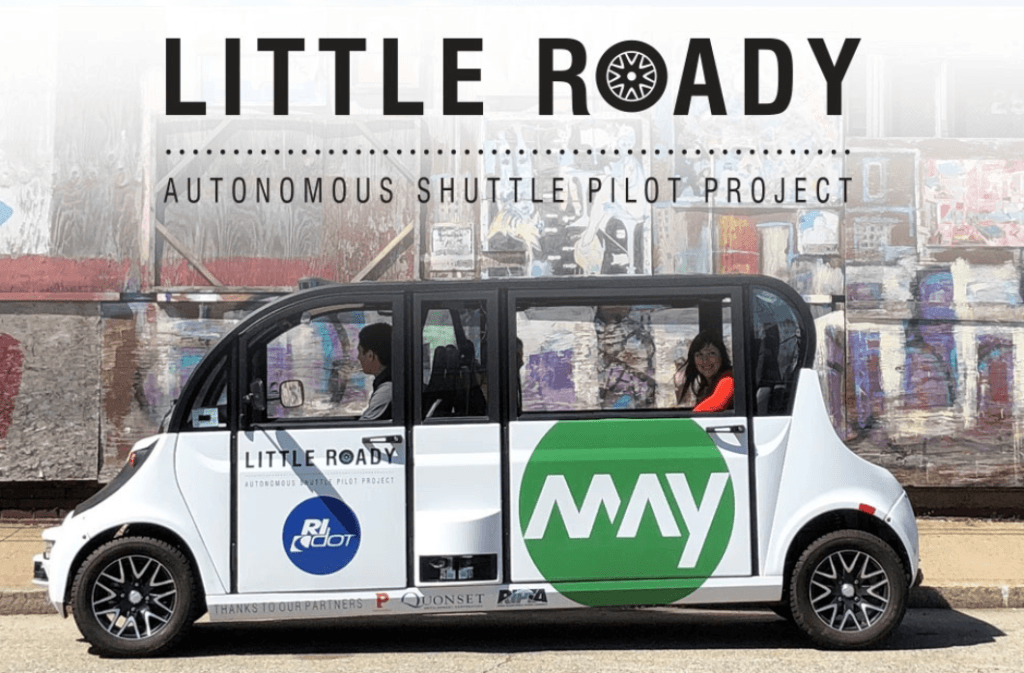