How do you pay for your bus ride? With cash or credit card? A transit pass? Do you use a vending machine to pre-load transit fares? Or can you use your phone or a mobility wallet to pay your fares? Evolving technologies have created new means of payment; passengers see transit agencies adapt to these changes across the United States. In New York City, the Metropolitan Transportation Authority (MTA) recently transitioned to OMNY, a system that allows customers to pay for their fares by tapping their credit cards to validators. On the other side of the country, 24 transit agencies in the Bay Area allow customers to pay for their fares with a single Clipper card.

Existing and new technologies can model how to ease peoples’ experiences with paying their transit fares. Unfortunately, many existing payment systems at transit agencies also create confusion. Often, customers must switch their means of payment or pay extra as they switch between transit systems in other communities. Other transit agencies have unintuitive and regressive fare policies or outdated technologies that complicate peoples’ boarding processes. NEORide, based in Ohio, is looking to change this paradigm by banding many small and medium transit agencies together. Based in Ohio, NEORide was created to coordinate the efforts of transit agencies, now across five separate states. NEORide has engaged in various measures, most notable being EZfare, an account-based system that lets customers at 15 transit agencies in Kentucky, Michigan, and Ohio, to purchase and redeem their fares using an app on their smartphone. This case study explores EZfare’s implementation process and how NEORide coordinates transit agencies to create a more integrated transportation system.

NEORide, a council of governments, was founded in 2014 to improve transit coordination among different transit agencies across Ohio. Since its founding, the Ohio Transit Risk Pool has served as the fiscal agent for NEORide. At first, NEORide had just three member transit agencies but has grown to 20 member agencies across Michigan, Ohio, Kentucky, West Virginia, and Arkansas. In March 2020, the Federal Transit Administration awarded the Stark Area Regional Transit Authority (SARTA), one of the founding member agencies of NEORide, with a nearly $2 million Integrated Mobility Innovation (IMI) grant to test and pilot EZfare, NEORide’s biggest project to date. With this funding and subsequent grants, NEORide and most member agencies have collaborated to develop and implement EZfare as a mobility-as-a-service (MaaS) system. Since launching EZfare, both NEORide and the payment platform have grown in scope, with increasing cooperation between different transit agencies and new plans for coordination across different modes of shared mobility.

EZfare is premised on the idea that purchasing and redeeming fares should be seamless. Before EZfare, each transit agency offered customers their own means of paying for transit. These separate payment systems often meant that customers had to purchase their fares with cash on board vehicles, at central transit agency locations, or through individual transit agency websites. Different fare policies and discovery and booking platforms often created confusion, especially for customers who used more than one transit system. Now, all participating agencies offer users a central account-based platform where they can purchase their fares and passes. NEORide has contracted with Masabi, a booking and payment platform company, to develop a single account-based fare payment system called EZfare. EZfare consists of three core components: 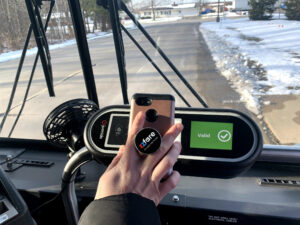 Description: Image of customer paying fare with their phone on a EZfare validator.
Click on image for full view.

At this time, 15 transit agencies across Kentucky, Michigan, and Ohio participate in EZfare service:

As a council of governments, NEORide has sought to improve coordination between its member transit agencies. While large transit agencies like the MTA in New York or LA Metro can influence broader practices in the transit industry due to their market power, NEORide’s influence comes from banding separate transit agencies together, improving their mobility services across large regions. Plainly speaking, NEORide’s goal with EZfare is to offer transit customers a streamlined transit ticketing system.

NEORide partnered with Cleveland State University to issue longitudinal surveys to transit users at different agencies using EZfare. 615 respondents completed the second survey round between September 2021 and February 2022. 245, or about 40% of respondents, indicated they used the EZfare system, compared to other payment options like cash or debit and credit cards; this was a 9% increase in EZfare usage for these users compared to the first survey cycle, when validators were not widely installed on buses across different transit systems. [1]

Users of EZfare offered positive feedback on the payment system. In the second survey, 98.3% of EZfare users believed that the platform made purchasing transit fare easier, 95.4% expressed that purchasing transit fares took less time, and 92.9% believed that EZfare helped to expedite the boarding process. Unfortunately, significant disparities exist between unbanked and banked customers. Only 31% of unbanked transit customers reported using EZfare in the second survey, compared to over 40% of banked customers. [2] While EZfare is a pleasant-to-use account-based payment system, NEORide and its agencies can work to bolster its utility for underserved and low-income communities.

NEORide has received an ongoing public funding stream from its participating transit agencies, the Ohio Department of Transportation, the Federal Transit Administration (FTA), and the Federal Highway Administration.

NEORide prepares and distributes standard marketing materials to participating EZfare agencies, including videos, social media, posts, press releases, and a centralized EZfare website. EZfare is a centralized product whose brand belongs to NEORide and its participating agencies; its message is also the message of transit agencies across Ohio, Michigan, Arkansas, Kentucky, and West Virginia.

Masabi, as the payment technology vendor for EZfare, has also marketed the MaaS platform considerably and received two industry awards:

EZfare looks to advance equity for transit users by providing access to cash payments and plans to implement fare capping. While EZfare is designed primarily for in-app credit card or debt payments, NEORide has also collaborated to accept payments in cash, which help unbanked and underbanked transit customers. Customers can go to many retail vendors, like pharmacies, grocery stores, and convenience stores, to load their EZfare accounts with cash payments. NEORide partnered with InComm, a payment solution vendor, to ensure that customers across many communities can access a broad range of retail partner locations where they can load their accounts.

Soon, EZfare plans to implement fare capping, a policy allowing users to acquire fare passes as they use transit systems instead of paying for the entire pass upfront. Fare capping eases the burden for customers who often cannot afford or rationalize paying the whole cost of a pass all at once. Fare capping often takes time for host agencies to implement, but EZfare provides a new infrastructure that makes this implementation process more convenient.

Soon, NEORide and Masabi hope to issue smart cards attached to peoples’ accounts. These smart cards can be helpful to customers who do not own smartphones so they can still use the EZfare system. These customers can still manage their accounts through EZfare’s online portal or loading their cards with cash at approved retail vendor locations.

NEORide also plans to integrate its member agencies’ paratransit services into the EZfare platform. Customers with disabilities and seniors will be able to use EZfare’s account-based system onboard different paratransit vehicles. Moreover, NEORide is using an ATCMTD grant to create a one-click/one-call system called EZConnect. EZConnect will help customers with accessibility needs more easily discover, book, and pay for paratransit and human transportation services. This latest round of funding will explore how the Transactional Data Specification (TDS) can help with payment coordination across multiple transit agencies.

NEORide and EZfare are a model for coordination for small and medium transit agencies across the United States. EZfare is a novel concept and can hopefully improve as a service to its users. As NEORide and its member agencies continue to develop EZfare and other services, the council of governments is encountering existing and upcoming challenges:

EZfare is a breakthrough initiative for medium and smaller transit agencies, easing peoples’ experiences with paying for their fares. As EZfare becomes more established in its participating communities and potentially elsewhere, NEORide hopes to implement new enhancements that improve its ability to be user-friendly. Some of these developments include:

EZfare is still a novel effort but is a pioneer in mobility as a service and interagency coordination in the United States. Many participating agencies might not have the resources to implement an EZfare-type of service alone. Still, NEORide has created a level of market power that makes EZfare impactful for agencies and its users. As NEORide continues to develop and implement EZfare, its member agencies will lead the way in fare policy, payment technologies, and regional coordination. Undoubtedly, EZfare has experienced and will encounter difficulties; its cash payment solution for unbanked and underbanked passengers is imperfect, and implementing fare capping can be complicated. At the same time, transit customers have positively received EZfare, and usage of the system is increasing. EZfare and other NEORide projects, like EZConnect. can broadly transform peoples’ experiences with public transportation and shared mobility.

Watch an interview with Katherine Conrad who oversaw the implementation of the NEORide EZfare program.

5 minutes
One-Call/One-Click: Bridging the Gaps between Customers and Human ...