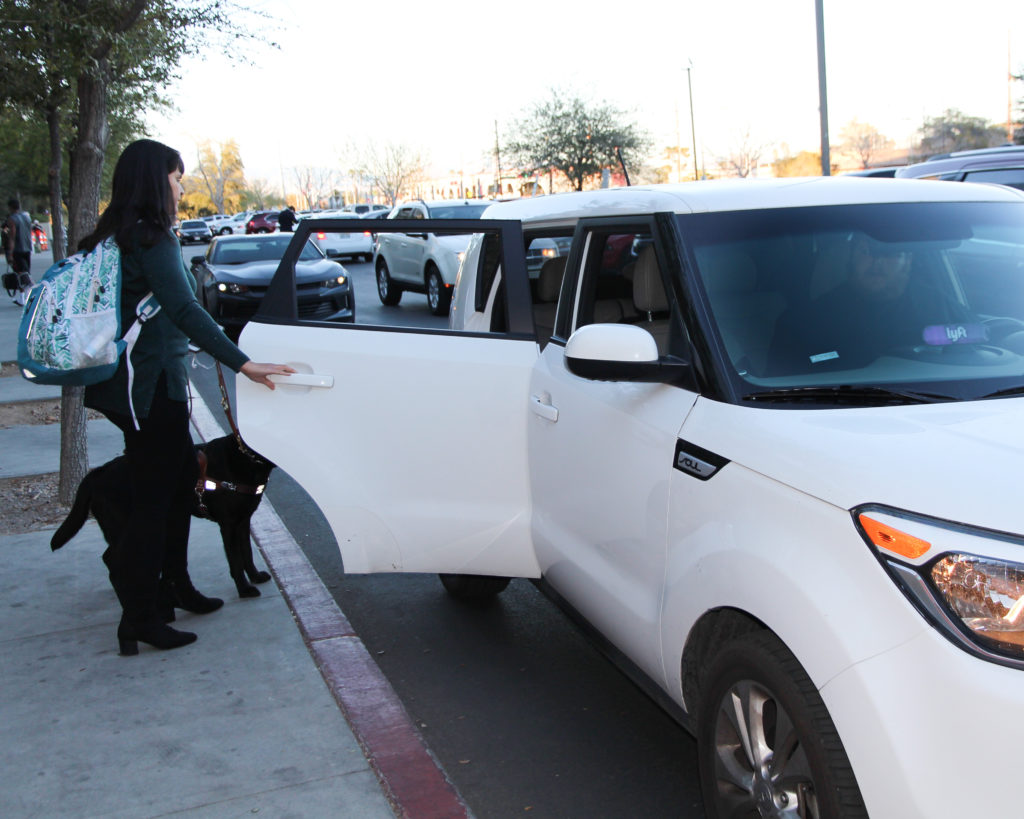 Technology-enabled mobility services offer opportunities for transit agencies to improve mobility for persons with disabilities and reduce costs of associated trips. Traditionally, transit agencies have provided mobility for persons with disabilities through demand-response paratransit service, in which riders book a trip ahead of time,  the day before the trip. This system, however, does not allow much flexibility for users and is expensive to operate for transit agencies. The widespread use of ridesourcing services like Uber and Lyft creates new opportunities to provide paratransit service (see the FTA’s “Shared Mobility FAQs: Americans with Disabilities Act (ADA)“).

The Regional Transportation Commission of Southern Nevada (RTC) is currently in its second phase of a pilot that looks to use partnerships with ridesourcing services to provide a faster, more convenient and efficient service for individuals with disabilities.

The RTC’s program is not the first to experiment with this model of delivering paratransit service. In 2016, the Massachusetts Bay Transportation Authority in the Boston area began a similar pilot program with Uber and Lyft that subsidized paratransit rides. The pilot is still ongoing, but initial customer feedback appears to be positive, as it has helped to shorten trip times and reduce costs per ride.

The idea for the RTC program began within the transit agency, as it looked for ways to improve the quality and convenience of its program, while managing the growing demand for its paratransit service. At the time, the only transit option for individuals with disabilities who couldn’t utilize fixed route service was a traditional paratransit van service, which requires users to schedule rides one to three days in advance. Not only was this option inconvenient for many users, it was also expensive for the agency, costing the RTC an average of $32 per ride. As the agency currently serves 11,000 active paratransit users and ridership is expanding at an annual rate of 3 percent, officials wanted an alternative option that could manage demand, reduce costs and effectively meet the growing needs of its users.

After researching alternatives, the RTC decided to try a pilot program that was very similar to Boston’s model.  The RTC then issued a Request for Information (RFI) to gauge potential interest in a partnership. The RFI was answered by Uber, Lyft and several private taxi companies. The agency was originally interested in partnering with multiple companies, especially local taxi companies, as many already provided WAV services in compliance with the Americans with Disabilities Act (ADA). However, the RTC was only able to reach a contractual agreement with Lyft and offered on-demand WAV service through a supplementary partnership with a local non-profit that had been providing accessible transportation in the area.

The Regional Transportation Commission of Southern Nevada has partnered with Lyft to provide on-demand, subsidized rides for paratransit users. Riders can use the Lyft app or the RTC’s Customer Care Center to schedule either a traditional Lyft ride or a shared ride on the pooled Lyft Line service, paying the standard fee of $3, with the RTC subsidizing the rest of the cost, up to $15. If the ride is more than $18, riders can choose to pay the remaining balance or schedule a ride through the traditional paratransit service. Customers who use a wheelchair can request a ride through the Customer Care Center, which then dispatches an on-demand Wheelchair Accessible Vehicle (WAV) to their location. WAVs are not available through the Lyft app. Program participants are given a quota on the number of rides, which was calculated through a formula that considered their use of conventional paratransit service during the previous 6 months.

The program aims to provide paratransit customers with an on-demand service that would be better able to accommodate their schedules and the sometimes-unforeseeable events that require immediate transportation. Additionally, the RTC was looking to ease demand on traditional paratransit service while better managing existing costs and services.

The initial pilot had a cap of 200 participants, which was achieved by gradually adding users over the course of the pilot. The agency purposefully chose to keep the pilot small, as officials wanted to receive and process qualitative feedback from each of the users and react quickly if there were issues that needed to be addressed. The first participants were the former users of a supplementary veteran’s mobility service that shut down, providing the RTC with a small pool of new users who needed paratransit service. Other participants were later added to the program by RTC officials, who both identified groups that would benefit from the program and reviewed interest forms submitted by current paratransit users. By late December, during the second phase of the pilot, there were a little over 200 participants

Qualitative feedback from participants was largely positive, with the majority commenting that it was an improvement on the traditional paratransit service. Unexpectedly, some of the most enthusiastic responses came from visually-impaired riders, who make up a large segment of the pilot participants.  Transit officials were initially worried that an app-based system might be difficult for the visually impaired, but changes in the design of the app and the ability to book a ride via telephone helped to mitigate these issues.

Usage rates largely kept steady under the program, with most participants using their full quota of rides every month. The RTC initially set the average quota at 46 rides per month, but soon reduced it to 22 rides after hearing about spikes in demand that occurred in similar programs. In Boston, for instance, the number of trips taken on paratransit increased by 28 percent during their pilot period. This jump in usage lessened the financial savings of the program; while average per-ride costs decreased by 80 percent, overall paratransit costs decreased by only 6 percent. In contrast, the RTC clarified from the beginning that their program’s goal was not to increase ridership, but to improve quality and cut costs.

The initial budget of the on-demand paratransit pilot program was $400,000, meant to serve up to 200 participants for 6 months. The pilot was under budget for its first phase, mainly due to the RTC scaling up the program slower than initially expected.

The program succeeded in reducing per-ride costs by 53 percent compared with its traditional paratransit service, including both WAV and non-WAV trips. The RTC sees this as a promising result that could save the agency money in the future, eventually allowing it to re-invest the funds in a variety of transit projects.

Officials at the RTC largely consider the program a success, but some issues emerged as the program progressed. These include:

-Wheelchair Equity: One of the main issues was equity of access for wheelchair users. All WAV trips, which made up a little less than 20 percent of total rides in the pilot, had to be scheduled over the phone and inputted through SafeRide, an online booking platform. An on-demand WAV was then dispatched from the agency’s non-profit partner to the customer’s location. However, the agency quickly realized that their partner organization did not have the bandwidth to handle the demand – resulting in slow, inefficient service. In the second phase of their pilot, the agency has partnered with a new WAV service provider, Tango. While the partnership had only lasted for 3 months at the time of this brief’s publication, initial reports suggest that Tango has been able to provide more responsive service.

-Driver Sensitivity: While visually-impaired customers were largely happy with the service, some reported that they had trouble with some Lyft drivers who weren’t familiar with their particular needs, such as the importance of announcing themselves upon arrival. Lyft and the RTC decided to address these complaints through the education of both drivers and passengers. For the drivers, sensitivity training materials were posted on Lyft’s driver platform, which is the online portal where Lyft drivers go to for information. The RTC also took steps to inform their customers about how service differs between Lyft and traditional paratransit. In the eight months since this outreach took place, no more complaints of this nature have been filed.

–Data Access: Through its contract with Lyft, the RTC had to settle for access to less comprehensive data than they receive from its other paratransit contractors. Instead of specific data points relating to each trip, Lyft provides more generalized data. For example, trip origin and destination are provided only by census tract, trip duration and distance are reported within a range, trip times are reported based on whether the trip took place on a weekday or weekend and whether it occurred during peak AM/PM hours. Officials say that due to the value of data collection to ridesourcing companies, they were expecting to receive less complete information and believe that their contract provides a reasonable level of data sharing given Lyft’s business model.

Recently, the RTC got approval from the Federal Transit Administration (FTA) to run the second phase of its pilot, which started November 1, 2018 and will run for six months. The main change between these phases will be the introduction of their partnership with Tango, an on-demand WAV service provider.

Officials at the RTC see the initial results of the pilot as a positive sign towards the establishment of a permanent program that could supplement traditional paratransit service. While there are numerous benefits to this model, it may not work well nor be safe for paratransit riders with severe cognitive and physical disabilities. Due to these limitations and the need to maintain existing paratransit contracts, the RTC predicts that its on-demand ridesourcing partnerships will expand slowly in the coming years and mainly serve to manage growing demand for paratransit services.

Transit agencies across the country are dealing with both rising costs and an increasing demand for paratransit services, driving officials to craft unique solutions. The Regional Transportation Commission of Southern Nevada has found that partnering with ridesourcing companies has been a way to not only address cost and manage growing demand, but also to offer riders more convenient and flexible service. The results of the pilot demonstrate the promise of such partnerships to solve a variety of issues within paratransit programs and could prove to be a useful tool for cities to effectively meet the mobility needs of their communities.