Following its 2018 E-Scooter Pilot Project, conducted from July 23 to Nov. 30, 2018, the Portland Bureau of Transportation (PBOT) published the attached findings report. Based on data gathered from API feeds, surveys of users and observers including the county health department (for safety).

The report sought to align e-scootersharing operation with City of Portland goals, as follows:

The city drew from examples such as Seattle’s dockless bikeshare pilot. Rather than giving providers free rein over public rights of way, the Portland Bureau of Transportation created a four-month pilot period from July through November of 2018. PBOT understood that working with operators to provide a regulatory framework would create a valuable source of knowledge about residents’ transportation habits. This methodology laid the groundwork for cities like Chicago to conduct their own scooter test-periods.

The report itself describes this approach, where Portland’s overall goals were ensuring safety and access while mitigating congestion and pollution. Over a 4-month period with a service area spanning the entire city, 2,043 total permitted scooters logged 700,369 trips covering 801,887.74 miles. In order to promote equitable service, PBOT required each e-scooter company to deploy at least 100 scooters in East Portland neighborhoods and to offer a special fare to low-income users. However, only 43 total low-income Portlanders were enrolled during the pilot, suggesting a lack of public engagement regarding the program. Throughout the pilot period, PBOT only issued 2 penalties. Skip Transport, Inc. was cited in both cases for failing to meet the city’s deployment requirements. Following the recommendations in this report, the city chose to conduct a second, year-long pilot from 2019 to 2020. The second pilot allows the city more time to test solutions to the unique challenges presented by this new form of micromobility.

Additionally, the media release reported the following findings from the study:

Several findings show that e-scooters were well-received by Portlanders:

Scooter safety risks were similar to other ways of getting around.
According to the Multnomah County Health Department, scooter related injuries increased from less than one per week before the pilot to about 10 per week during the pilot. Weekly emergency room visits peaked in late August and early September before decreasing to near pre-pilot levels by the end of the pilot in November.

E-scooters replaced driving and ride-hailing trips.
34 percent of Portland riders and 48 percent of visitors took an e-scooter instead of driving a personal car or using Uber, Lyft, or a taxi.

Having safe scooter infrastructure mattered to riders.
Based on scooter ride data, riders preferred riding on low-traffic streets such as Neighborhood Greenways and on streets with bike lanes. This was also confirmed by rider survey data.

With speeds capped at 15 mph, scooters are appropriate for bike lanes or low-volume streets, but they are too fast for use on sidewalks, where they make it unsafe or uncomfortable for people walking or using mobility devices. And while staff observations showed most scooters parked properly in the sidewalk furnishing zone, improperly parked scooters negatively impacted accessibility and created a hazard for people with visual impairments.

E-scooter use in parks impacted other users and presented a significant management challenge for Portland Parks & Recreation staff.
Although bicycles are allowed in Portland parks, including Waterfront Park and the Eastbank Esplanade, motorized vehicles are not. E-scooter use on Portland parks trails violated Portland Parks & Recreation’s rules, but most riders (66 percent) said they weren’t aware of the rules.

The report includes extensive discussion of its methodology for data gathering and analysis. 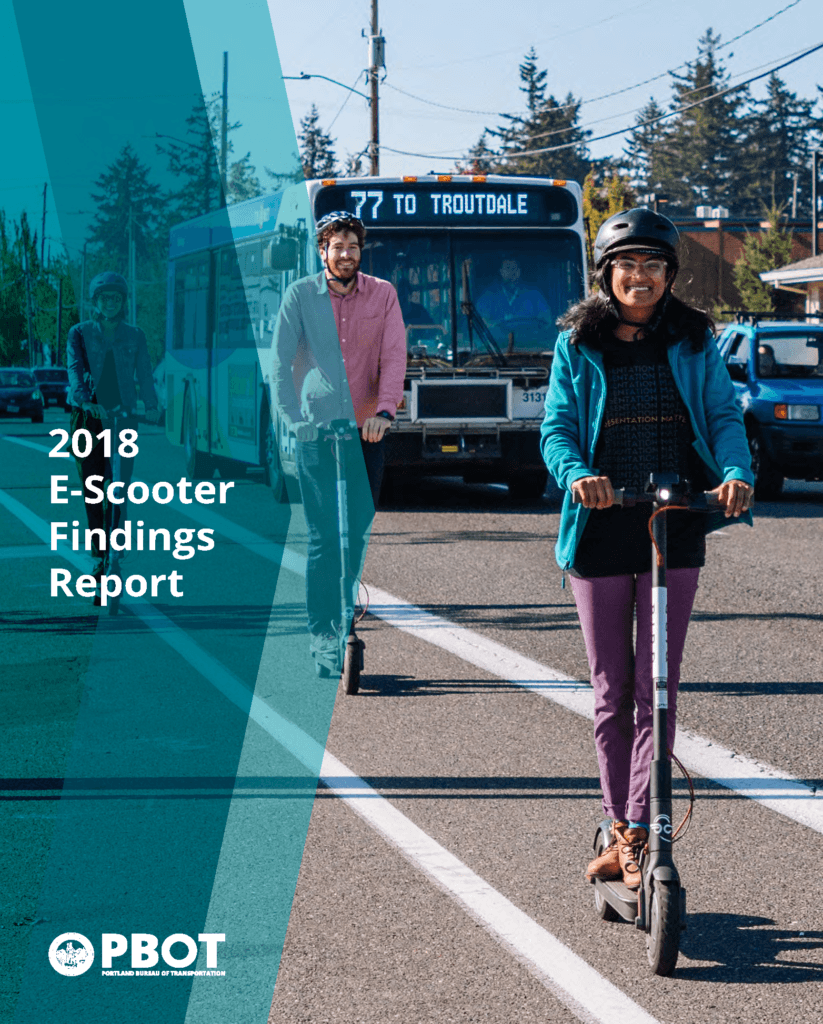