Microtransit, like most on-demand mobility services, is less a completely new mode than an evolution of existing modes enabled by technology. Unlike many of the other shared modes, microtransit can take many forms in how it operates, the types of vehicles it uses, and the forms of partnerships (if any) that enable it. This variation leads to a wider range of definitions than the other shared modes, as discussed below. The broad range of possible applications for microtransit can also lead to its use for meeting existing transportation challenges. This Learning Module attempts to bring the mode into focus for public agency planners. An examination of previous pilots and resulting studies indicate that microtransit is not a one-size-fits-all solution. Rather, it is one of many tools available to help meet the mobility needs within a community.

The Federal Transit Administration (FTA) currently uses the definition from the SUMC-authored Shared Mobility and the Transformation of Public Transit (TCRP Research Report 188), which captured the innovations in the early operation of the mode as an: “App-enabled private multi-passenger transportation service that serves passengers using dynamically generated routes, and may expect passengers to make their way to and from common pick-up or drop-off points.”

These definitions all locate microtransit as a transportation service between fixed-route transit and ridesourcing operations. Fixed-route transit services have defined stop locations, routes, and schedules and usually operate along straight lines/corridors. In North America, they are typically funded and operated by government agencies, though private services, such as company shuttles and jitneys, also exist. Ridesourcing is on-demand, point-to-point service that may or may not be shared, with hailing/reservations, dispatch, routing, and payment supported enabled by location-aware mobile computing platforms.

Microtransit services draw components, to varying degrees, from both types of service. It resembles traditional demand-responsive transit (DRT), such as dial-a-ride, in that it often uses similar vehicles (passenger vans or cutaways) but with improved dispatching and routing, enabled by various mobile technologies, especially location access through smartphones or mobile tablets. Rides may be arranged through a smartphone app, in addition to more traditional phone- or web-based booking systems.

For the public sector, microtransit faces a conundrum: It is almost always less productive than traditional fixed-route transit in terms of trips per vehicle service hour (as circuitous, point-to-point routes can reach fewer people per hour than straight-line ones). If the service becomes more popular, vehicles and drivers (i.e. cost) must be added to accommodate the growth and maintain service quality, in which case fixed-route transit might be the more appropriate or cost-effective solution because of its ability to scale.

In practice, this means that privately owned microtransit, like many newer shared mobility services, operates in areas with sufficient density to support more efficient pooling of rides–areas that are also productive for fixed-route transit. On the other hand, general public microtransit could be deployed in areas where fixed-route transit is difficult to operate productively, or where a flexible service might provide first/last-mile connections with faster response times than is possible with scheduled service. It can be a tool to serve populations in low-density areas that are low-income, lacking other mobility options, or in political jurisdictions that are contributing to transit funding.

The microtransit services described above broadly share these characteristics:

In some services, particularly general public microtransit services, users can also request services by a voice call handled by a call center.

Microtransit may operate in a variety of service designs, including:

The Canadian organizations MaRS Discovery District, The Atmospheric Fund, and COOP Carbone released a report entitled Microtransit: An Assessment of Potential to Drive Greenhouse Gas Reductions that looks at the potential of using microtransit as a means of reducing single occupancy vehicle use, and by extension greenhouse gas (GHG) emissions, in the greater Toronto and Montreal metropolitan areas. The report authors along the way explain a wide range of topics, including: delivery models and consumer typologies. Ultimately, after calculating the GHG savings (the methodology might be helpful for future studies), the authors conclude that microtransit might hold significant potential to reduce transportation related GHG emissions.

The International Transport Forum (ITF) studied the potential impacts of shared mobility, including microtransit, in combination with existing public transit, to lower transportation related CO2 emissions.  Using real trip data, the ITF model looked at a what if scenario and asked the question what would happen if all of the private car trips were replaced with shared modes.  The model found that only 10 percent or less of the number of vehicles were needed to get people where they needed to go when they needed to get there.  Subsequently, the model also found under this what if scenario that CO2 emissions dropped by 1/3 and the benefits also extended to freeing up on-street parking.  Replacing all of the private vehicle trips might not be realistic, so to further explore the impact of shared mobility, the model also simulated replacing 20 percent of vehicle trips with shared modes.  Similarly, the model found that CO2 emissions could be reduced by as much as 20 percent if such as scenario were to be reached.  To read more about the study download the Shared Mobility Simulations for Helsinki report.

Because it often either resembles existing demand responsive transit modes or supplements fixed-route service, public microtransit can be operated in a wide variety of partnership configurations. Different types of partnerships reflect the capital and operational needs of the partnering agency. A microtransit service provider can partner to provide any or all of the technology, vehicles, drivers, maintenance, and other operations, according to the specific needs of the public agency. (The private partner’s provision of technology is generally common to all these arrangements.)

The Shared-Use Mobility Center webinar, Microtransit Public-Private Partnerships, provides an overview of how the mode operates in P3s, generally, and features public partners from four cases, including:

Other microtransit examples include:

Lone Tree Link is a microtransit service that evolved from a traditional circulator shuttle that extended service from the Denver RTD light rail transit to large employers. In a later iteration, the city partnered with Uber to pilot an on-demand service that used both ridesourcing vehicles and one of the circulator service vans to provide on-demand service within the suburb. In 2019, the light rail service reached two stations and a terminal in Lone Tree, so the need for microtransit shifted. The re-launched program serves any origin-destination pair within the city limits.

The Toronto exurb of Innisfil, Ontario, considered traditional fixed-route bus service to address demand for public transit. They considered and calculated costs for both one-bus and two-bus acquisitions and operations for a smaller and larger service area, respectively. Desiring a larger service area, the department of transportation staff recommended issuing a Request for Expression of Interest, followed by an RFP for demand-responsive transit. They ultimately formed a partnership with Uber to pilot the UberPool ridesharing platform to fulfill, along with taxicab service, transit functions in the city. According to a CityLab article, the service was popular, but its growth meant increasing costs, prompting the city to raise fares, reduce discounts, and limit the number of rides a rider can take every month. While the service remains popular, a mode like rail might enjoy economies of scale with rider adoption, but smaller vehicles require more supply to meet demand.

Norwalk (Connecticut) Transit District developed Wheels2U as a pilot program to serve transportation needs to an emerging retail area and to provide service to existing nightlife destinations in their entertainment district. Previous fixed-route bus operations to the district after daytime working hours had shown low service efficiencies, with buses running at low ridership levels and numerous bus stops being unused. The Wheels2U microtransit service uses branded cutaway vans during evenings, beyond their service hours as ADA complementary paratransit vehicles. The pilot became a program, and continues to grow. While the agency has not yet charged a fare, it plans to as it expands in popularity.

Like Norwalk, Gwinnett County, Georgia has extended its free pilot. It too uses wheelchair-accessible cutaway vans, and has no fare at the moment. As discussed in the linked Eno Center for Transportation webinar, the transit agency hopes that its paratransit users might also use the service.

The appropriate mobility solution and service delivery model for your community should be driven by the goals and budget of the project. The goals of a project can be high level (e.g.; increased mobility options) or more granular (e.g.; improved level of service per user cost). Other goals could include reduced car dependency, increased mobility for older adults and people with disabilities, or increased public transit ridership. These project goals are examples from pilot projects from the MOD Sandbox program, but agencies should develop their own based on the nature of the project and the community being served. Once the project goals are established, it is important to develop a set of performance benchmarks and identify the required data needed to measure whether or not a stated goal has been met. Community input is important throughout this process to identify the needs of a pilot project’s intended users.

Having established a set of project goals the next step is to develop a set of performance metrics and the data needed to measure them to assess a pilot project’s effectiveness. Examples include:

For additional performance metrics, you can consult the MOD Sandbox Demonstration Independent Evaluation plans, which contain detailed goals and performance metrics for a variety of projects, including microtransit and first/last-mile projects in Seattle, Los Angeles, Pima County AZ, and Pierce County WA. Visit the National Transportation Library to access all of the independent evaluation reports for the FTA MOD Sandbox projects. 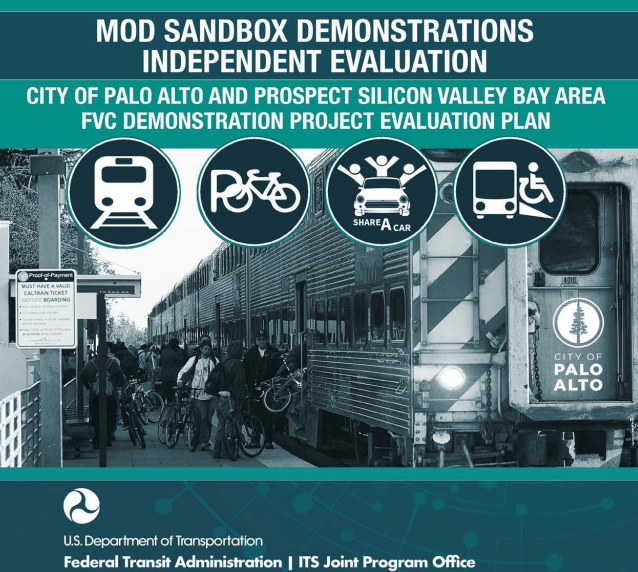 Another example for establishing Performance Metrics is presented in the Transit Cooperative Research Program (TCRP) Synthesis 141, Microtransit or General Public Demand–Response Transit Services: State of the Practice, which is a meta-study of microtransit and a collection of case studies. As mentioned in the introduction of this Learning Module, when in a partnership, microtransit tends to fill needs where fixed-route service has trouble working, so its metrics will be different. As the synthesis notes:

The table below gives a good idea of the current state of P3 microtransit ridership, service productivity, and costs, showing the critical passengers per vehicle service hour measure.  The examples offer a discrete set of performance metrics that, when applicable, can then be used to identify how well a project meets its stated goals.  A performance metric might meet one goal, for example lowering the unit cost per trip, but other project goals also need to be considered, such as providing equitable service across a geographic area.

Respondents reported an almost remarkable consistency in average ridership ranging from 2.4 to 4.7 passengers per hour. As is the case with fixed route services, DRT that operates in areas with greater population or employment density tends to perform better than DRT operating in areas of lower density.

Note. The numbers are self-reported figures from agencies that responded.

Microtransit has grown in popularity over the last several years, fueled in part by technological advancements in vehicle routing and mobile apps. As a consequence, transit agencies and cities are looking toward partnerships with private microtransit operators to provide enhanced mobility solutions in their community. General public microtransit is best deployed where fixed-route transit may not be productive due to low density, poor street connectivity, or other factors. As these microtransit services mature, agencies must understand how these services are helping them achieve their goals, with consideration for factors such as rider satisfaction, productivity, and cost, to determine whether and how microtransit should play a role in their robust public transit networks.