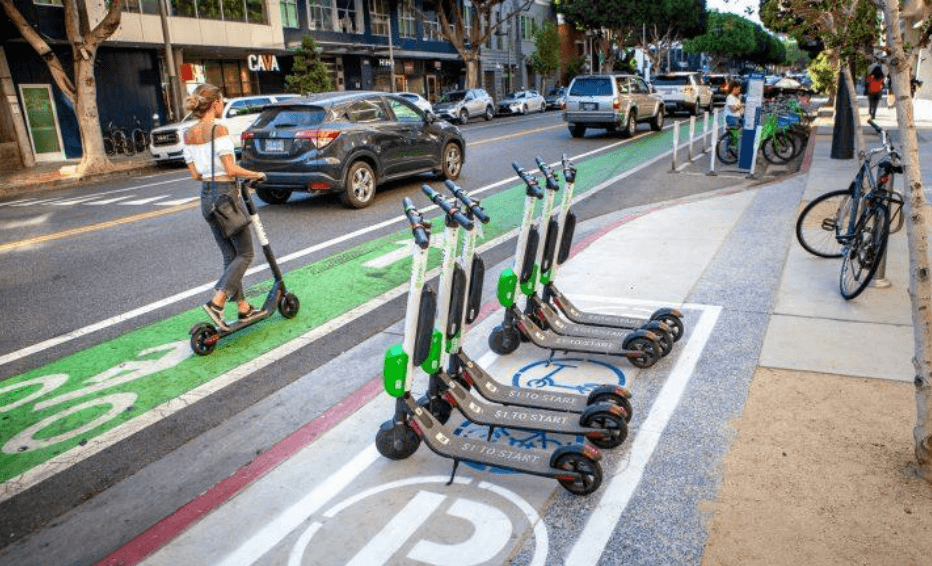 No mode better illustrates the accelerating growth of shared mobility than electric scooter (e-scooter) sharing. While this module includes some discussion of the larger-format sit-down scooters, it will mostly focus on the small wheel, stand-up, dockless, app-driven “kick scooter” mode that have proliferated across North American cities.

E-scooter sharing benefits from the convergence of a few technologies: A synthesis of more affordable advanced battery technology with free-floating dockless bikesharing technology and a similar business model enabled a quick deployment to a customer base familiar with their use through the aforementioned modes. Any user with access to a smartphone and a credit card can download an app. Once approved, the user can find a charged scooter, unlock it, and rent it on a per-ride basis.

The breakneck evolution of dockless micromobility (i.e. bikesharing and scooter sharing, for now) from privately-owned bicycles and publicly owned station-based bikes outpaced regulation in its early stages, and many local codes did not have any clear regulation for the dockless shared vehicles. The start-up operators stepped into the gap with a strategy of simply placing scooters in the market and announcing their availability. Just as the dockless bikesharing sector faced a backlash among the public and their elected officials, e-scooters faced negative media attention for operations and parking, and they elicited protests on both aesthetic and ADA-compliance fronts. This led to outright temporary bans on scooter sharing in some areas to pilot programs and more traditional permitting processes in many other areas.

The mode remains popular regardless of the additional regulation, and e-scooter operators have become acquisition targets for larger mobility companies such as the ridesourcing companies Uber and Lyft. This reflects a larger trend towards consolidation in the industry.

This learning module will examine definitions of electric scooter sharing; ways that jurisdictions have planned for the arrival and operation of the mode, along with model policies; public-private partnerships; and finally, case studies on scooter sharing.

The on-board technology that enables dockless shared electric scooter sharing directly evolved from dockless bikesharing technology, and it operates similarly for the user, who downloads a smartphone app to register for the service and unlock the vehicle. The business tends to be regulated under the same model as bikesharing, while regulation of scooter operation in the public right of way is far from settled. Some jurisdictions still view the vehicles as a toy or recreational device, while others see it as a vehicle.

Meanwhile, the free-floating electric scooters/mopeds tend to borrow from the (also relatively new) free-floating carsharing technology. Long a presence as a gas-operated private vehicle, the shared electric scooters/mopeds tend to share regulations that are beginning to be based on power output or speed. Smaller vehicles usually require a standard automobile license, as opposed to a motorcycle license, and operate in the public right of way. Although the regulations vary by state, the California DMV provides a helpful illustrated guide along with their descriptions.

Privately operated, these systems are accessed via an app on the user’s smartphone. The bikes contain all of the electronics and locking mechanisms, and can be tracked by the user; operator; and if relevant, the regulating agency. (Portland)

Across the US, cities have taken a variety of different tracks to regulate the deployment and use of e-scooters. Some have passed city ordinances that set speed and weight limits for the vehicles and dictate where they are allowed to operate, while others have launched public-right-of-way (PROW) permit programs, where interested operators must apply for permit from the city. These permit requirements often have stipulations regarding minimum and maximum fleet sizes, parking restrictions, data sharing requirements and permit and/or per vehicle costs. [Ideally insert line on SUMC/NUMO database to be launched soon.] Often, city ordinances and operating permits are written to pertain to both e-scooters and dockless bikeshare systems.

The below policies represent an evolution of scooter policy from an emergency reaction to the adoption of it as a micromobility transportation option.

As mentioned in the Portland report, there is a precedent in pilot projects and programs for other modes (e.g. free-floating carsharing) to require location of a minimum number of vehicles within lower-income or otherwise transportation disadvantaged neighborhoods. The scooter pilot in Chicago adopted these principles to require the scooter companies to re-balance a percentage of their vehicles within two priority zones every morning.

Other examples of cities working to ensure equitable access to scooters include:

Scooter safety is a prime concern for scooters that might call for additional research from an equity perspective. An Austin, Texas study on scootershare safety conducted by the Austin Public Health Department (APH) and the Centers for Disease Control and Prevention found that first-time users were especially likely to crash. The first of its kind, the study looks at scootershare safety by examining emergency room visits followed by telephone interviews. Just as with bikesharing, safe streets, access to helmets, and equitable enforcement of traffic laws should be examined. Seated scooters and other more stable vehicle formats might also be more accessible to users with disabilities that make stand-up scooters not feasible.  The CDC study also found that lacking infrastructure such as potholes and limited protected lanes also contributed to increased risk for accidents, which cannot be addressed by stricter user requirements or enforcement.

Some cities, such as Seattle in 2018, banned scooters altogether due to concerns about safety. However, Seattle is planning to launch a scooter pilot program with permitted operators in 2020. Some of this willingness to open doors back up to scooter companies may be due to the data coming out of cities suggesting safety concerns can be managed. For example, in Portland, OR, there were 176 scooter-related emergency room visits from July 25 to November 20, 2018, which the city stipulates was fewer than the number of bicycle injuries over the same period.

Scooters companies are aware that concern regarding scooter safety is a major obstacle to greater deployment and use. In July 2019, Lime launched its Public Policy and Safety Advisory Board to help develop city-level micromobilty regulations. Another major operator, Bird, launched a 100-city tour to increase safety through virtual and in-person rider trainings.

Most cities do not require helmet-use for scooter users over 18 years, although there are free helmet distribution programs in several cities.

The study of the possible environmental benefits of electric scootersharing is in its early stages as well. Any mode that encourages an overall mode shift from single occupancy vehicle (SOV) car trips might contribute to environmental benefits. In its 2018 evaluation, Portland, OR found evidence that “suggest[ed] that e-scooters facilitate mode shift, most notably away from walking, single occupancy vehicles, and ride-hailing. Comparing these percentages to the total number of scooter miles traveled during the e-scooter pilot (801,887 miles), we estimate that e-scooters replaced approximately 301,856 vehicle miles that would have been traveled in single occupancy vehicles and other shared vehicle trips” (PBOT, 27).

However, some questions remain about the over environmental impact of e-scooters when their overall lifecycle is taken into consideration. For example, a 2019 study out of North Carolina State University suggests that the pollution from scooter production (typically in Southeast Asia), shipping to the US, and then deployment and redistribution of the vehicles the around a city (typically in cars) is greater than pollution from a standard bus with high ridership, an electric moped or an electric bicycle. If a scooter trip were to replace a trip taken by car, it would be more efficient, but the study researchers found that only about one third of scooter users surveyed would have otherwise used a car; almost half said they would have biked or walked if the scooter had not been available.

Many companies are working to make their scooters more environmentally-friendly. Spin and Swiftmile announced a pilot partnership in the fall of 2019 to roll out solar-powered charging stations for scooters in Washington DC (40 stations) and Ann Arbor, MI (10 stations) on private property.

The shared electric scooter mode is relatively young, as of the writing of this Learning Module. It is not surprising, then, that public-private partnerships are relatively young. The pilot projects serve mostly a regulatory function. While the pilot programs might be technically framed as partnerships, in that that the public agencies are calling for proposals and offer some form of exclusive operation rights, they largely spring from regulation.

Since the summer of 2018 when many scooter companies were launching unsanctioned operations in local rights-of-way, many cities have passed regulation, often grouped with dockless bikes, and future partnerships might include additional transit-supportive and equity provisions. During the COVID-19 pandemic in the spring of 2020, several transit agencies turned to e-scooter companies to help fill in transportation gaps caused by the crisis. Many mayors encouraged residents to use micromobilty modes like e-scooters in place of crowded public transit, some cities temporarily banned cars from select streets to make more space for these modes, and some others, like San Francisco, announced they would ease distribution requirements during the crisis for scooter operators to make it easier to keep the vehicles in operation. The way many public agencies and cities approached micromobility services during the outbreak suggests a growing acknowledgement of the important role such services can play within the larger transportation network, and could lead to more public-private partnerships between scooter companies and transit agencies going forward.

Even before the COVID-19 crisis, many cities were taking steps to incorporate e-scooters into the suite of mobility options available to residents by developing mobility hubs around transit stations. These hubs, like the ones launched in Minneapolis, MN in the fall of 2019, feature access to public transit, bike stations and e-scooters parking, and way-finding signage. Launched in July 2019, the Pittsburgh Mobility Collective is another promising example of partnerships involving e-scooters; this voluntary collective includes Skinny Labs (a.k.a. Spin), the Transit app, Zipcar, Ford Mobility, Waze and Swiftmile, and it aims to find innovative ways to expand and complement access to mass transit services and the public bike share system in Pittsburgh, PA.

At this point, most of the reports on the mode have existed as broad, synthetic examinations of the mode. While shared moped-style scooters are an older mode, they are not widely adopted in North America. Case studies of shared electric kick scooters have just started appearing. The

The Micro-Mobility Revolution: The Introduction and Adoption of Electric Scooters in the United States offers a detailed overview of the rise of electric scooter sharing that expands on many of the themes discussed here.

Charlotte, North Carolina is less a complete case study than the NACTO report shown above, but it shows how local government with operational shared mobility systems can use data provided by the operators in the pilot program and from a local user survey.

Portland, Oregon is an example of a community that created a pilot program in anticipation of the scooters’ arrival, after the major scootersharing companies contact the city. The 2018 E-Scooter Findings Report both outlines every step of the process towards implementing the regulations, including public education and outreach, and shares the findings from the gathered data. The report then draws on the findings to to recommend another pilot to improve service and better achieve public goals.